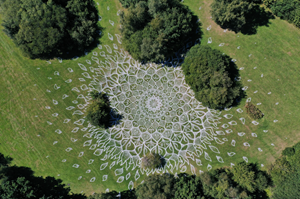 A large-scale public art installation has arrived at Halewood Triangle as part of Knowsley’s year as Liverpool City Region Borough of Culture.

A large-scale public art installation has arrived at Halewood Triangle as part of Knowsley’s year as Liverpool City Region Borough of Culture.

Created by internationally renowned artist James Brunt, the work entitled The Knowsley Mandala, is around the size of one and a half football pitches in length and will be available to see for the next four weeks, after which time the natural elements will wear it away.

Cllr Shelley Powell, Knowsley’s Cabinet Member for Communities and Neighbourhoods said: “This artwork is just phenomenal, and I’m overwhelmed that is has been created here in Halewood. It really is a very special moment for local people to be able to come along and see this – it is truly world class and I’m so proud that we’ve brought something as magnificent as this to Knowsley as part of our year as Liverpool City Region Borough of Culture.”

The Knowsley Mandala forms part of a wider land art project – United By Land – that James is delivering across the borough. Later this August and in September James, along with several other accomplished land artists, will deliver workshops where local people and communities can work with him to create outdoor installations at Halewood Triangle, Stadt Moers, Mill Dam and Bowring Parks.

Cllr Powell continued: “We are so lucky to have such fantastic parks and green spaces in Knowsley and these spaces have been key to our cultural programme this year. I hope people are inspired by The Knowsley Mandala, come along to the workshops and take the opportunity to make their own land art with James. What an opportunity!”

Earlier this year James also worked with local schools to create work made from found natural materials from twigs and leaves to conker shells and pine cones. James also created pop-up art installations in parks across the borough, the location of the pieces were revealed via clues shared on social media that people had to solve.

James commented: “I am so excited to present this work and to be delivering such an extensive programme that allows people to explore the joy of land art. The Borough of Culture celebrations are so exciting, and I am thrilled to be part of that and to make sure that nature and the outdoors is celebrated.

“During my time in Knowsley and while installing The Knowsley Mandala I’ve had the chance to speak to many inquisitive residents who have been intrigued and thrilled by the work that’s right here on their doorstep. Land Art shows people the realms of what art can be and the joy of creating work using materials you can find in any green space. I hope my work has inspires people and leaves a legacy.”