Kunsthaus Zurich Presents ‘YOKO ONO. THIS ROOM MOVES AT THE SAME SPEED AS THE CLOUDS’ 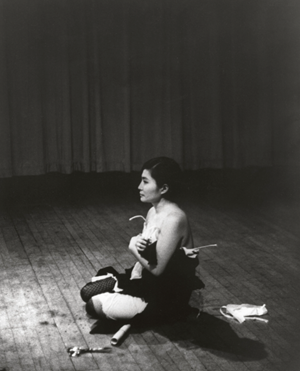 From 4 March to 29 May 2022 the Kunsthaus Zürich will be showing the exhibition ‘YOKO ONO. THIS ROOM MOVES AT THE SAME SPEED AS THE CLOUDS’.

Yoko Ono (b. 1933) is one of the most influential artists of our time. Her performances and actions of the 1960s and 1970s have achieved cult status. Some of them will be performed and exhibited at the Kunsthaus Zürich. The artist is personally involved in the exhibition’s conception.

FOR PEACE AND WOMEN’S RIGHTS

Since the beginning of her career, Yoko Ono has explored issues of socio-political importance that are still highly relevant today. From early on, she has been committed to peace in the world and the feminist cause. Ideas always play a central role in her work: sometimes she formulates them in a playful and humorous way, sometimes quite radically, and then again very poetically. Some are transformed into objects while others are left immaterial. Yoko Ono’s artistic oeuvre is correspondingly diverse, encompassing sculptures, works on paper, installations, performances, film and music. Kunsthaus curator Mirjam Varadinis, in collaboration with Yoko Ono and her long-time curator Jon Hendricks, has selected some 60 of them to arrange into an exhibition.

Most of the works start out with ‘event scores’ or ‘instructions’, a majority of which Yoko Ono published for the first time in 1964 in the celebrated square booklet ‘Grapefruit’. This small but seminal work of conceptual art contains directions for simple actions that anyone can execute and that transform basic, everyday activities and forms of expression (such as going for a walk, striking a match or laughing) into performances. What really matters, though, is imagination: the artwork can take shape entirely in our heads, and does not necessarily have to be acted out. Yoko Ono was one of the first to write such ‘event scores’, and in doing so she radically transformed and permanently expanded the concept of art. She chose the title ‘Grapefruit’ because she saw the fruit as a hybrid, a mixture of lemon and orange. She regarded herself as a hybrid too – between Japan and America, East and West, between visual art, music and performance.

That multifaceted artistic practice is what gives Yoko Ono’s work its contemporary relevance, in an era when the boundaries between artistic disciplines are increasingly breaking down. The idea of the audience as performer and the everyday staging of the individual through social media are now of central importance.

WORKS FROM ALL CREATIVE PERIODS

The exhibition at the Kunsthaus Zürich sets out to reaffirm that relevance. It shows a selection of key works from all periods of Yoko Ono’s artistic career, with a focus on the early years. The presentation is not a classical retrospective: it brings more than 50 years of artistic creativity to life from a modern-day perspective. Visitors will be able to participate in a wide variety of ways. Yoko Ono is personally involved in the conception of the exhibition.

The Yoko Ono exhibition is the first presentation of the artist’s work in a major Swiss museum and also the first solo exhibition by an international artist in the medium-sized temporary exhibition gallery of the Chipperfield building, which opened in October 2021. A wide-ranging performance programme is planned to accompany the exhibition, in which key works by Yoko Ono will be performed (see www.kunsthaus.ch, from February).

A ‘programme booklet’ containing texts by various authors sheds light on these performances and key themes in Yoko Ono’s work. It includes contributions by RoseLee Goldberg, Catherine Morris, Patti Smith, Dorothee Richter, Fanny Wissler, Emma McCormick-Goodheart and others. The publication will be available in the Kunsthaus shop and from bookstores.