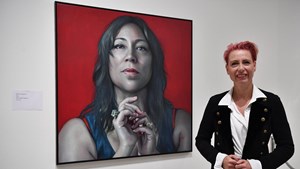 The Art Gallery of New South Wales’ head packer Brett Cuthbertson and his packing room team have awarded the 30th annual Archibald Packing Room Prize to Kathrin Longhurst for her portrait of the celebrated Australian singer and songwriter Kate Ceberano.

The Art Gallery of New South Wales’ head packer Brett Cuthbertson and his packing room team have awarded the 30th annual Archibald Packing Room Prize to Kathrin Longhurst for her portrait of the celebrated Australian singer and songwriter Kate Ceberano.

Longhurst’s painting is one of 52 finalist works from 938 entries received for the Archibald Prize 2021, which is celebrating its 100th year.

The German-born, Sydney-based artist is mostly self-taught and was previously a finalist in the Archibald Prize 2018 and Sulman Prize 2012.

The Packing Room Prize is a cash prize awarded to the best entry in the Archibald Prize as judged by the Art Gallery staff who receive, unpack and hang the entries. This year, the prize money has doubled, increasing from $1,500 to $3,000 for the winning artist.

After 40 years working at the Art Gallery, head packer Brett Cuthbertson holds 52 percent of the vote for the Packing Room Prize.

‘Kathrin’s work fits my criteria. It’s a portrait of a well-known celebrity and it looks like her! I met Kate Ceberano many years ago and Kathrin has really captured her likeness. As soon as I saw the work, I thought “that’s it”,’ said Cuthbertson.

‘This is also the first time in my tenure as head packer that I have awarded the Packing Room Prize to both a female artist and female sitter. I have been on the lookout, but this is the first time it stood out to me as a clear winner.’

Longhurst’s work is the second portrait of Kate Ceberano to win the Packing Room Prize in its 30-year history, following Peter Robertson’s win in 1994. Ceberano was also the subject of an Archibald Prize 2010 finalist portrait by Christine O'Hagan.

After learning she had won the 2021 Packing Room Prize, Longhurst said she was ecstatic.

‘I first spoke to Kate in early 2020 about collaborating on a portrait. She had seen my work at the home of mutual friends and asked if I was interested in painting her next album cover because she liked the way I portray women as strong and powerful. We attempted to get together several times, but lockdowns and border closures cancelled every trip,’ said Longhurst.

‘The extended lockdown in Melbourne meant it took us some time to meet and we missed the album cover deadline. But we decided to paint the portrait to create a record of Kate at this important moment in her life and as a legacy for her daughter.’

‘I was quite daunted before painting this portrait, as Kate is such an iconic person and there are so many incredible images of her already out there. I really wanted to create something new and fresh that captures her personal growth after the devastating consequences of lockdown on the entertainment industry last year. I painted her larger than life, looking fiercer and stronger than ever before.’

An Australian entertainment icon, Ceberano has released 28 albums over 40 years, hitting the Top 10 charts across five decades, and won three ARIA awards. She was the first woman inducted into the Australian Songwriters Association Hall of Fame in 2014.

This year, 2144 entries were received for the Archibald, Wynne and Sulman Prizes, making it the second highest number of entries following the 2020 record year. The Art Gallery also received the highest ever total number of entries by Aboriginal artists across the three prizes.

The Archibald Prize received 938 entries for its centenary year; the Sulman Prize received 546 entries; and the Wynne Prize received 660 entries. For the first time, there are more finalist works by women than men across the three prizes.

The Archibald, Wynne and Sulman Prizes, the Young Archie competition and the Archibald Prize regional tour are all generously supported by presenting partner, ANZ.

Mark Whelan, Group Executive, Institutional at ANZ said: ‘ANZ has a proud history of supporting the arts community in Australia. We are delighted to announce that the prize money has doubled in recognition of the 30th anniversary of the Packing Room Prize. This is an important award and we congratulate artist Kathrin Longhurst on receiving the 2021 Packing Room Prize.’

The Archibald Prize, first awarded in 1921, is the country’s favourite art award, and one of its most prestigious. Awarded to the best portrait painting, it’s a who’s who of Australian culture – from politicians to celebrities, sporting heroes to artists.

The Archibald Prize 2021 exhibition will travel to six venues in regional New South Wales and Victoria from October 2021, offering audiences around the country the opportunity to see all finalist works.