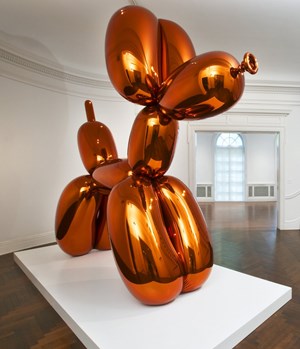 Curated by Massimiliano Gioni, the exhibition provides a unique view into the exceptional career of one of the world’s best-known contemporary artists, whose work bridges Pop, Minimalism and the readymade. This is Koons’ first exhibition in the Gulf region.

Lost in America presents a portrait of American culture as seen through Koons’ autobiography, beginning with his childhood in suburban Pennsylvania. The exhibition features more than sixty artworks drawn from Koons’ four-decades-long career and is divided into 16 galleries, each introduced by the artist, emphasising his memories, influences and fascination with American visual culture. Conceived as an expansive self-portrait, Lost in America also includes sculptures and paintings with mesmerising, mirrored surfaces that reflect the viewers and call attention to notions of self-transformation and becoming.

Some of the artist’s best-known work will be represented from series such as The New (1980–87), Banality (1988), Celebration (1994–), Popeye (2002–13) and Antiquity (2008–), alongside more recent works that will be shown for the first time during this special exhibition. In Koons’ paintings and sculptures, including some of the artist’s most iconic pieces such as Rabbit (1986), Balloon Dog (Orange) (1994–2000) and Play-Doh (1994–2014), everyday objects and industrial materials are transformed into engaging artworks that pose questions about desire and hope, the self and transcendence, individuality and the masses.

Throughout his career, Jeff Koons has radically transformed the world of art, forging new relationships between the avant-garde and mass culture, while developing new paradigms for the role of the artist in the age of hyper-communication. He shares a preoccupation with American popular culture with many of his predecessors, who include artists such as Roy Lichtenstein and Andy Warhol, and with peers such as Robert Gober, Barbara Kruger, Richard Prince, Charles Ray and Cindy Sherman.