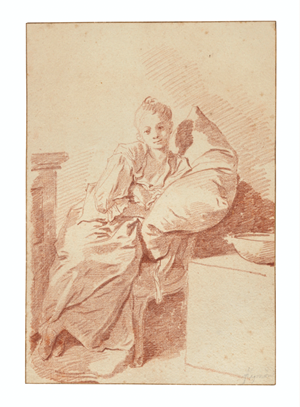 A young girl seated in an interior, leaning against a pillow (‘La Jeune malade’)

On its first recorded appearance on the market, at the sale of the collection of the baron de Schwiter in 1883, this little-known masterpiece by Fragonard was titled La Jeune malade (‘The young convalescent’), perhaps reflecting an earlier tradition. As Eunice Williams remarked in 1978, the young woman posing may well have been Rosalie, the artist’s beloved daughter, who was born in 1769 (op. cit., p. 138). While she has been recognized in many works by – or attributed to – her father, arguably the only secure portrait of her is a sketch in black chalk at the Louvre (inv. RF 41195; fig. 1); Pierre Rosenberg sees in the drawing the features of Marie-Anne, Fragonard’s wife and the girl’s mother: ‘her slightly heavy chin, her dark eyes and arched eyebrows, and her stubby nose’ (in Fragonard, exhib. cat., Paris, Galeries Nationales du Grand Palais, and New York, The Metropolitan Museum of Art, no. 293, ill.). If the present drawing, like the sheet in Paris, indeed represents Rosalie, it must date from around the same time, when Rosalie was about sixteen or seventeen, i.e. around 1786 or 1787. Shortly after, in October 1788, Rosalie died of consumption, and this context may explain the drawing’s ‘subtle tone of sadness’, and while it is in no way ‘a true portrait, […] the sensitive portrayal of mood, age and physical state seems appropriate to the attention and love Fragonard would show his ailing daughter’ (Williams, op. cit., p. 138)