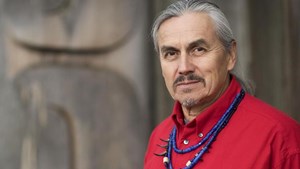 British Columbia carver James Hart, hereditary chief of the Eagle Clan of the Haida Nation, has won the $100,000 Audain Prize for Visual Art as the province’s most distinguished artist.

British Columbia carver James Hart, hereditary chief of the Eagle Clan of the Haida Nation, has won the $100,000 Audain Prize for Visual Art as the province’s most distinguished artist.

Michael Audain, chairman of the Audain Foundation, described Hart as “one of B.C.’s greatest living artists” and “a carver in a long line of Haida artists.”

James (Jim) Hart or Chief 7idansuu of Masset, Haida Gwaii is widely known for his contemporary interpretations of traditional Haida sculpture. His work can be found in many prominent public and private collections across Canada and abroad.

Born in 1952 into the Eagle Clan of Old Masset, he is the great grandson of renowned artist and former Chief 7idansuu Charles Edenshaw (1839 – 1920). As a young man of 24, Hart discovered carving when he became and assistant to Robert Davidson on the Charles Edenshaw memorial longhouse in Masset. He then moved to Vancouver and from 1980 to 1984 served as Bill Reid’s assistant, instrumental in carving the finish on what is perhaps Reid’s best-known sculpture The Raven and the First Men, now located at the Museum of Anthropology.

Hart has since progressed his art through experimentation with different materials, techniques, and imagery. In 1982 he was the first Northwest Coast artist to make a bronze sculpture of a model pole.

In 1988, he supervised the construction of the Haida house in Ottawa’s Canadian Museum of History. His 2011 bronze sculpture, The Three Watchmen, is installed outside the National Gallery of Canada as part of their permanent collection.

In 2017, the Reconciliation Pole was raised at the University of British Columbia, carved by Hart to tell the story of Canada’s First Nations before, during and after the residential school system. The work is studded with thousands of copper nails which were hammered in by survivors and affected families in the community, each representing the life of a child lost to the school system.

And the only free-standing dance screen in the world, the iconic The Dance Screen (The Scream Too) carved in red cedar, now resides in the Audain Art Museum in Whistler. It poignantly tells a story about how the salmon people sustain all forms of life on the North West Coast. These are only a few examples of Hart’s extraordinary and thought-provoking work.

Hart was awarded the Order of British Columbia in 2003, received a Queen’s Diamond Jubilee Medal in 2013. He holds honorary degrees from Emily Carr University of Art + Design and Simon Fraser University.