James Cuno Retires as President and CEO of the J. Paul Getty Trust 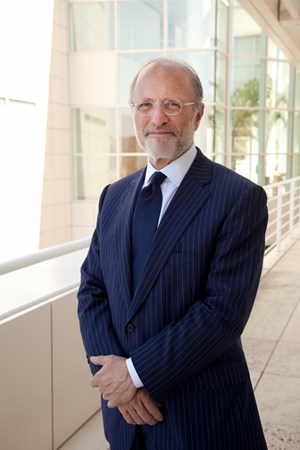 International arts leader and scholar James Cuno announced plans to retire from his post as the president and CEO of the J. Paul Getty Trust, after a decade at the helm of affairs.

International arts leader and scholar James Cuno announced plans to retire from his post as the president and CEO of the J. Paul Getty Trust, after a decade at the helm of one of the world’s largest philanthropic organizations dedicated to visual arts and cultural heritage.

“It has been my honor to serve this tremendous organization, and to play a small part in expanding its mission to broaden and deepen our understanding of the human experience through the visual arts,” Cuno said.  “It has been incredibly fulfilling to see the impact of our collective work in conservation, research, museum presentation, and philanthropy, and I am so grateful to the many dedicated staff and volunteers who make it all possible.”

Cuno informed the Board of Trustees of his intentions to remain in his role until his successor is selected and in place. Cuno said that recently turning 70, completing his 10th year of service, and “the natural transition to a post-COVID world” all factored into his decision. As president emeritus, he will continue to work on projects related to the greater understanding and conservation of the world’s cultural heritage, he said.

“Jim brought great stability and energy to Getty, which has grown stronger through digitization and expanded engagement with both Los Angeles and the world,” said Board Chairman David Lee. “Jim deeply understands the power of art to unify the world, to teach us about humanity, and to connect us through our common heritage.  He is one of our greatest art historians, and his leadership in this regard has been unwavering.”

Lee said the Getty Board will appoint a committee to begin an international search.

Over Cuno’s tenure, Getty increased its outreach and engagement in the Los Angeles region, most recently providing $10 million to seed the LA Arts Recovery Fund, which grew through matching funding to provide more than $37 million in pandemic recovery support for 90 Los Angeles-area small- and mid-sized community arts organizations. Getty is now preparing for the third in its Pacific Standard Time series of arts collaborations, to be held across the Los Angeles region in 2024, with grants to dozens of arts organizations to create exhibitions, publications, and scholarship on the theme of art & science.

Cuno has been passionately committed to diversifying Getty’s collections, as well as its research and education efforts. In 2019, the Getty Research Institute launched an African American Art History Initiative to document the historical impact, contemporary import, and cultural legacy of works by African American artists, to provide a more robust and accurate history of American art for the training of future scholars. Also in 2019, Getty joined four other major foundations in acquiring the historical Johnson Publishing Co. Photograph Archives, comprising more than four million photographic prints and negatives documenting the African American experience over 70 years.

Initiatives to draw international attention to the plight and importance of ancient art and cultural heritage were a high priority during Cuno’s tenure, with ambitious projects in conservation, collection sharing, and education, as well as an ongoing series of museum exhibitions on the classical world in context.

“In the past 10 years as the ancient heritage of the world has come under threat from so many factors—climate change, development, armed conflict—Jim Cuno has been tirelessly engaged with identifying solutions for the issues that imperil our shared heritage,” said arts scholar Kavita Singh, a Getty trustee and professor at the School of Arts and Aesthetics of Jawaharlal Nehru University in India.

“Bringing together experts, leaders, and organizations to think across disciplines and out of the box, catalyzing and supporting projects, and raising fundamental questions in international forums, Jim has made the Getty a major force in the global efforts in this field,” Singh said. “Getty has been fortunate to have had his leadership, and I am sure it will carry his legacy forward.”

Getty’s fundraising program was inaugurated during Cuno’s tenure, resulting in a robust Getty Patron Program and endowed directorships of the Getty Conservation Institute and Getty Museum.

Cuno made cross-program collaboration throughout the Trust a priority. He integrated digital teams and invested resources in innovative digital education and art-sharing projects, several of which have won major national and international awards. For the past five years, Cuno has hosted the Art & Ideas podcast, producing over 150 conversations with artists, scholars, and others in cultural fields.

Throughout the pandemic, Cuno ensured that Getty had no furloughs or layoffs of any employees or contractors, while staff teams planned for a return to normal public operations. And he supported Trust-wide efforts to improve diversity, equity, accessibility, and inclusion across the organization, including implementation of a formal DEAI Plan and formation of a staff DEAI Council and task forces.

Cuno said he intends to remain active in the profession. He is a fellow of the American Academy of Arts and Sciences, where he is member of its Council and serves as International Secretary. He is also a trustee of the Courtauld Institute of Art, Willamette University, and the Pulitzer Arts Foundation.

Prior to joining Getty, Cuno was president of the Art Institute of Chicago from 2004 to 2011, where he oversaw the development of its Modern Wing, a large gallery and education building designed by Renzo Piano. Prior to that, he was director and professor of the Courtauld Institute of Art, University of London, from 2003 to 2004; the Elizabeth and John Moors Cabot Director of the Harvard University Art Museums and professor of the history of art and architecture at Harvard from 1991 to 2003; director of the Hood Museum of Art, Dartmouth College, from 1989 to 1991; director of the Grunwald Center for the Graphic Arts, UCLA, from 1986 to 1989; and assistant professor of art, Vassar College, from 1983 to 1986.

A prolific writer and scholar, Cuno is the author and editor of numerous books and papers, including Whose Muse?: Art Museums and the Public Trust (2004); Who Owns Antiquity?: Museums and the Battle over Our Ancient Heritage (2008) and Museums Matter: In Praise of the Encyclopedic Museum (2011).