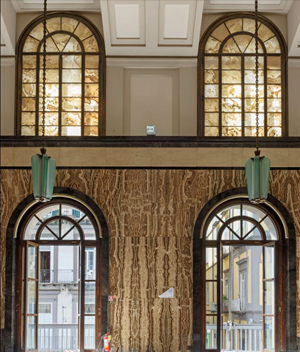 On Tuesday 17 May 2022 in Turin, at Palazzo Turinetti in Piazza San Carlo, Intesa Sanpaolo's registered office and historic headquarters, the Bank will inaugurate its fourth museum: ten thousand metres of exhibition space on five floors, three of which are underground. The architectural project transforms the spaces of Palazzo Turinetti into a unique place where photography and video art will document and preserve images, events and reflections to promote issues related to the evolution of environmental, social and governance sustainability. The "Gallerie d'Italia - Turin" will be home to the Publifoto Intesa Sanpaolo Archive – with around 7 million shots taken from the 1930s to the 1990s by one of Italy's leading photojournalism agencies – and will display a selection of works from the Group's collections, including the cycle of paintings from the ancient Oratory of the Compagnia di San Paolo owned by the Bank.

Two exhibitions wil be inaugurated at the new Gallerie d'Italia - Turin: Fragile wonder: A journey into changing nature by Paolo Pellegrin, a photojournalism exhibition dedicated to the theme of climate change, and From War to the Moon: 1945-1969, a selection of historical images from the Intesa Sanpaolo Publifoto Archive documenting the economic miracle leading up to the greatest achievement of modern man: the landing on the moon.

On Saturday, 21 May 2022 in Naples, the new headquarters of the Gallerie d'Italia will be inaugurated in the monumental historic building of the former Banco di Napoli designed by architect Marcello Piacentini, located at Via Toledo 177. The "Gallerie d'Italia – Naples" triples the current spaces of Palazzo Zevallos Stigliano to ten thousand square meters. This is a highly impactful architectural project that updates the building without distorting its historical value. The size of the spaces puts the Neapolitan Galleries on a par with large national museums; the museological and museographic criteria adopted are in line with the most innovative, recognised international museum standards.

The first temporary exhibition hosted in the new location will be the final exhibition of the 19th edition of Restituzioni, the two-year programme of safeguarding and enhancing the national artistic heritage that Intesa Sanpaolo has been conducting for over 30 years in collaboration with the Italian Ministry of Culture. The public heritage works from archaeological sites, museums and places of worship from all over Italy restored thanks to Intesa Sanpaolo over the last three years will be exhibited to the public. Around 200 works will be on display, from antiques to contemporary pieces, with the participation of 80 restoration laboratories and 54 conservation organisations.

The Neapolitan museum will host some of the most important pieces from the Intesa Sanpaolo permanent collection, spread in three themed itineraries and including: a selection of Neapolitan and southern Italian paintings and sculptures from the beginning of the 17th to the first decades of the 20th century, starting with the masterpiece of the Intesa Sanpaolo collection, the Martyrdom of Saint Ursula by Caravaggio, as well as new expositions dedicated to Attic and Magna Graecia ceramics and modern and contemporary art.

The opening of the two museums is a fundamental step by Intesa Sanpaolo in promoting culture in Italy and enhancing the value of its artistic heritage of over 35,000 owned works of art, the economic value of which been included at fair value in the financial statements since 2017.

The four Gallerie d'Italia museums – Milan, Naples, Turin and Vicenza – evoke common distinctive traits, consolidating the Intesa Sanpaolo museum system managed by the Bank's Progetto Cultura, created to enhance the historical and artistic heritage that has flowed into the Group over the years. The premises are historic buildings that were formerly the Bank's offices and that, in the renovation work guided by the new requirements – including opening to the public, protection and preservation of works of art, sustainability and full accessibility – maintain a clear recollection of their past functions.

Both museums will implement numerous activities, including original temporary exhibitions, education for schools, scientific research and social inclusion initiatives. Some of the spaces will be available for city events and initiatives.