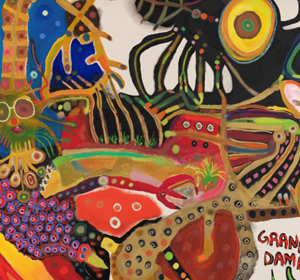 Independent 20th Century will focus on artists who made a significant contribution to art history between the years 1900 and 2000, yet who were uncelebrated in their day.

Independent 20th Century will focus on artists who made a significant contribution to art history between the years 1900 and 2000, yet who were uncelebrated in their day. These artists are now being championed by a generation of gallerists who are reassessing the canon to make it more inclusive and representative of our times.

The annual event will take place at the historic Battery Maritime Building at Cipriani South Street in downtown Manhattan on September 8-11, 2022, coinciding with the fall art fair calendar. More than 30 international gallerists with museum-quality programs will be present at Independent 20th Century. It will be the second of two fairs to take place in the organization’s 13th year.

Social movements such as #MeToo and Black Lives Matter, and unprecedented global scares such as the pandemic, have shaken the art world and given voice to a much more diverse community of artists with a completely different historical and creative ancestry. Independent 20th century will tell the stories of these artists, who were ahead of their time and whose stories have not yet been told, through a new fair framework, and thanks to gallerists who seek to redefine art history by revisiting the past — a past that looks much more like us.

One of the most exciting generational, social and political shifts in the contemporary art market in recent years has been the emergence of a new wave of gallerists championing a diverse set of artistic propositions, whether by living artists or by their historical forebears. Independent is launching a mission-oriented fair to provide a platform for this reexamination — to question previous assumptions about art history, and present chapters in that history that went unnoticed, generating a debate about what art history and the canon should be.

The approach taken by this new generation of gallerists, most of whom were born after 1970, has been an inspiration to us. They have consistently supported art that falls outside the dominant canon. Independent 20th Century will deliver an inclusive and critical space for the reassessment of women artists, artists of color, and artists from geographical territories and communities outside the major cultural capitals of the world.

For collectors, contemporary art is constantly being redefined to include works from a variety of periods, living artists and estates. At Independent Art Fair — founded in 2010 and recognized as a launchpad for emerging artists who have gone on to achieve international fame — more than 30 percent of the 2022 edition will be devoted to previously unseen or unrecognized historical art.

At the moment, there is not a single fair that extends the notion of Contemporary art beyond 1970 to include the entire 20th century, or that is predictive of this emerging and increasingly dominant phenomenon known as Contemporary art. The time is right to create a focused experience for collectors who are interested in work from across this widening spectrum, and who value connections between geographies, zeitgeists, and avant-garde movements.

Matthew Higgs, Independent’s founding curatorial advisor, notes: “The ongoing, and necessary reassessment of the art historical canon is perhaps the defining characteristic of the 21st Century art world. Independent 20th Century will seek to amplify this narrative through its focused presentations by a cross-generational community of defiantly idiosyncratic artists.”

Independent 20th Century has been conceived in close collaboration with a core group of gallerists and curatorial advisors: Alma Luxembourg, of Luxembourg + Co., London; Joseph Nahmad, of Nahmad Contemporary, New York, Gió Marconi, of Gió Marconi, Milan and Vito Schnabel, of Vito Schnabel Gallery, New York /St. Moritz. Founder, Elizabeth Dee states, “I am inspired to work closely with this new generation to reassess the work of artists of the 20th century. Together, we are creating a completely new space for this growing network of gallerists and collectors.”

Independent 20th Century is also pleased to announce two new appointments. Dieter Buchhart, freelance curator, Vienna and Fernanda Brenner, Artistic Director, Pivô, Sao Paulo, will work under Matthew Higgs’ curatorial direction. They will be joined by interim chief operating officer Sofie Scheerlinck, formerly the global managing director at TEFAF. Scheerlinck states: “Over many years Independent has established itself as consistently presenting new, cutting-edge voices to the art market. The extension of its curatorial voice to recent historical material is a natural progression for the Independent brand, elevating both events to reflect the interests of its maturing collector base and exhibitor community.”