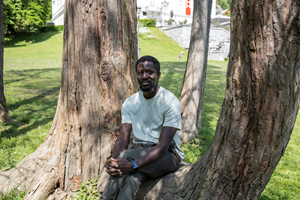 Mahama is an artist from Ghana, a country with a solid connection to Yugoslavia between the late 1950s and 1966, when Ghana’s first president, Kwame Nkrumah, was overthrown in a military coup d’état. Mahama has long been interested in the post-independence infrastructure in Ghana, especially in buildings that were part of a Nkrumah socialist programme to make Ghana self-sufficient. Later, these structures were wholly abandoned. The impact of architects from former Yugoslavia on the institutional buildings such as the University in Kumasi was particularly significant in this period. Ibrahim Mahama sees the invitation to become the artistic director of the Ljubljana Biennale as a challenging opportunity to explore this part of history and reconnect some of the lost moments or voids of that time’s shared connection between Ghana and former Yugoslavia.

The artist announced that the next Ljubljana Biennale would be very simple. At the same time, it will draw connections that have been lost or even probably never been made within its context. Mahama is very interested in (re-)establishing such connections and especially connecting the local Slovenian art community with artists abroad, thus creating intercontinental relations within the 35th Ljubljana Biennale of Graphic Arts.

Visual artist Ibrahim Mahama was born in 1987 in Tamale, Ghana. He lives and works in Accra, Kumasi and Tamale. His work has appeared in numerous international exhibitions, including the Venice Biennale, the Biennale of Sydney, Saatchi Gallery in London, K21 in Dusseldorf, the Eli and Edythe Broad Art Museum in Michigan, the Tel Aviv Museum of Art in Israel and many others.

Mahama’s best-known works involve draping entire buildings with a patchwork of reused jute sacks. He repurposes cocoa sacks that he finds in local markets in Ghana. He shows his works in Ghanaian markets as well as galleries. Through his choice of exhibition spaces, his works critically reflect on the value system inherent to these materials.

Represented by the blue-chip London powerhouse gallery White Cube, Mahama uses proceeds from his art practice to initiate and support cultural and educational institutions in Ghana. He is creating ways to keep contemporary African art on the continent. In 2019, he opened the artist-run project space Savannah Centre for Contemporary Art (SCCA) in Tamale. Later, he opened a vast studio complex, Red Clay, in nearby Janna Kpeŋŋ in 2020. Both sites represent Mahama’s contribution to developing and expanding the contemporary art scene in his home country, encompassing exhibition space, research facilities, and an artist-residency hub. In 2021, Mahama transformed a renovated silo in Tamale into the Nkrumah Volini artistic centre.

The 35th edition of the Ljubljana Biennale, under artistic director Ibrahim Mahama, will be created in cooperation with a number of international partners (to be announced) and national partners including Cukrarna Gallery, a recently renovated sugar rafinery from 1828 that has served as a venue for both exhibiting and performing contemporary art since September 2021.