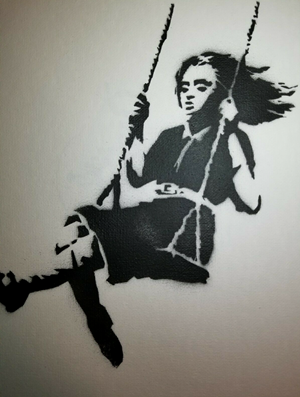 Hilco Real Estate today announced the structured sale of a historic, newly renovated mixed-use mid-rise in the heart of Los Angeles' Fashion District known around the world for the authenticated Banksy mural, "Girl on a Swing," on its exterior

Hilco Real Estate today announced the structured sale of a historic, newly renovated mixed-use mid-rise in the heart of Los Angeles' Fashion District known around the world for the authenticated Banksy mural, "Girl on a Swing," on its exterior. It is Banksy's only work in Los Angeles that remains undisturbed in its original location, and one of a handful of his pieces that remain preserved in their places of origin. Offers on this one-of-a-kind property are due October 20, 2022.

Challenges stemming from the COVID-19 pandemic prompted the building's owners to sell through a structured sale process, presenting a once-in-a-generation opportunity to own a cultural landmark and a priceless work of art in a prime area of Los Angeles. The impact of the mural's social commentary on the revitalization of Los Angeles' historic core is multiplied by its preservation on the side of the building.

The art nouveau/gothic revival mid-rise, centrally located on the border of Los Angeles' Historic Core and its Fashion District at 908-910 S Broadway, was built in 1914 and underwent an all-expenses paid effort to restore it to its original condition in 2018. Thanks to this, the building boasts seven floors and over 26,000 sq/ft of top-rate commercial real estate space, class-A first-floor retail space, and a unique basement space ideal for a speakeasy-type bar, all close to Los Angeles landmarks like the Ace Hotel, Crypto.com Arena and the Apple Tower Theatre. It also has deep ties to classic Hollywood, having been featured in the 1923 film Safety Last! in which silent film star Harold Lloyd scales its outer façade and dangles from the arms of a clock on its exterior, an iconic moment in cinematic history.

"This sale presents an unprecedented opportunity to own a treasured Banksy mural, a unique piece of Hollywood history and an icon of Los Angeles culture contained within a beautifully restored art nouveau landmark," said Jeff Azuse, Senior Vice President of Hilco Real Estate. "908-910 S Broadway's one-of-a-kind characteristics provide limitless potential for anyone interested in the prestige and functional capabilities that come with its ownership."