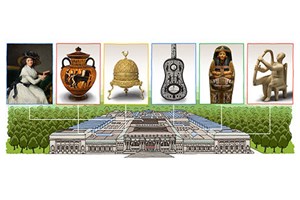 The 151st anniversary of the founding of The Metropolitan Museum of Art will be celebrated with a custom Google Doodle, the creative treatment of the Google logo featured on the search engine’s homepage.

The 151st anniversary of the founding of The Metropolitan Museum of Art will be celebrated with a custom Google Doodle, the creative treatment of the Google logo featured on the search engine’s homepage. The Met-inspired animated Doodle will launch in the United States at 12 a.m. on Tuesday, April 13, and be viewable for 24 hours. The Doodle will appear in more than 20 countries.

The Doodle features a rotating carousel of objects from across The Met’s vast collection, with the objects echoing the shapes of the letters in the word “Google.” Featured works include a sculpture of a dancer from 2nd-century B.C. China; a 13th-century terracotta sculpture of a seated figure from the Inland Niger Delta region of present-day Mali; The Unicorn Rests in a Garden (1495–1505), from the Unicorn Tapestries; a portrait of the comtesse de la Châtre by Elisabeth Louise Vigée Le Brun, from 1789; a highly decorated Italian guitar from around 1800; an elaborately beaded Lakota/Teton Sioux dress made around 1870; and Samuel Joseph Brown, Jr.’s Self-Portrait from around 1941. A rendering of The Met’s Fifth Avenue building is shown underneath the works of art, with lines indicating where each object is located within the galleries.

The work of Google artist Erich Nagler—who was inspired by The Met’s ability to connect people to art across time and place—the Doodle was created to invite everyone, everywhere to virtually visit the Museum.

More information on each of the objects in the Doodle can be found on the Museum’s website. The images are all drawn from The Met’s Open Access program, which includes some 400,000 photographs of objects in the Museum’s collection available for use without restriction.

Below the Met-inspired Doodle is a link to an immersive online journey through the Museum’s anniversary exhibition, Making The Met, 1870–2020, which was on view from August 29, 2020 to January 3, 2021. The online tour is part of Google Arts & Culture, which provides access to the collections of more than 2,000 museums. The Met was one of Google Arts & Culture’s first partners when the platform launched 10 years ago. Today, the platform hosts The Met’s Open Access collection, virtual tours of the Museum through Google Street View, and over 30 digital exhibitions.