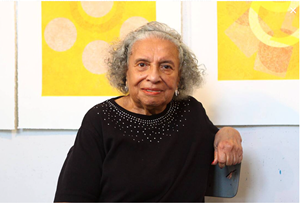 The Getty Research Institute has acquired the archive of Evangeline J. Montgomery. As a curator, cultural worker, and arts administrator, Montgomery used her positions within and outside the government to advocate for representation of African American artists through national and international exhibitions and institutional programming.

“Montgomery worked tirelessly behind the scenes for a more equitable, and truer, version of American art and art history” says LeRonn P. Brooks, associate curator for modern and contemporary collections. “Montgomery’s archive moves underrecognized histories of African American art exhibitions, organizations, artists, lectures, and meetings to the foreground during an era of their widespread exclusion from the mainstream artworld.”

“Montgomery’s archive is a significant contribution to the GRI’s growing collections of African American art texts and other research materials, specifically within the context of lesser-known and understudied African American art exhibitions, organizations, and cultural events from the late 1960s through the 1980s,” says Mary Miller, director of the Getty Research Institute. “Much of this material, in the form of rare publications, ephemera, and correspondence, has rarely been saved and cannot be found through traditional means.”

Dating from the 1970s, her archive and library reflect her wide-ranging contacts and interests, containing approximately 220 linear feet of valuable documentation. The collection encompasses nearly 600 books, as well as catalogues, correspondence, leaflets, and other forms of ephemera, such as slides, audio recordings, video cassettes, and documentary photography.

Examples include correspondence with organizations such as the Arts and Culture Committee of the Coalition of 100 Black Women of D.C. and the African American Museums Association. The archive contains literature from The Journal of the National Conference of Artists and the American Association for State and Local History, for whom Montgomery created and led arts workshops. The archive also contains rare exhibition pamphlets from important exhibitions such as Romare Bearden’s “Memory and Metaphor: The Art of Romare Bearden, 1940-1987,” and catalogues for renowned African American artists Sargent Johnson, Bob Thompson, Charles White, and Betye Saar.

More personal items are included as well, such as an award for service from the United States Information Agency. Though she was never one to seek the limelight, Montgomery’s archive contains vital documentation of the exhibitions, programs, and organizations—both large and small—that helped define the field of African American art and scholarship during the latter half of the twentieth century: slides, photographs and documentation of her art work and studio practice; images and documentation of prominent Black artists and scholars such as Samella Lewis, Betye Saar, Sam Gilliam, Leslie King Hammond, Richard Powell, and others; documentation of a major event for the national Conference of Artists (NCA), Montgomery's work in the San Francisco Bay Area in the 1970s in connection with San Francisco College, the Oakland Museum, and the California and San Francisco Arts Commissions.

About Evangeline J. Montgomery
Montgomery was born in New York, NY. She received her B.F.A. from California College of Arts and Crafts in Oakland, CA. She moved to Oakland in 1965, and by 1967 had founded an African American artists' advocacy group called Art West Associated North (AWAN). Like other political organizations concerned with African American visibility and self-definition, the association protested the exclusion of African American artists from local museums and galleries.

Montgomery began curating independently during the late 1960s and would go on to organize over 150 exhibitions over the course of her career. In 1968, she joined the staff of the Oakland Museum as an art consultant under the museum's Cultural and Ethnic Affairs Guild (later responsible for founding the Black Filmmakers Hall of Fame in 1974, and in 1976, the first Oakland Black Cowboy Association parade). During this time, she also served as an art consultant for the Rainbow Sign Gallery in Berkeley, California, a progressive Black cultural center active between 1971 and 1978.

Montgomery later became an  exhibition specialist for the American Association for State and Local History in Nashville, and also organized national exhibition workshops for the Association of African American Museums. And from 1976 until 1979, Montgomery served as a San Francisco art commissioner. In 1983, she began her career with the United States Department of State as a program development officer for the Arts America Program at the United States Information Agency (USIA), using her position within the government to make sure African American artists were better represented in international exhibitions.

Montgomery was also an active studio artist working in prints, metals, fiber and photography. Her work is in the collections of the Los Angeles Board of Education (Los Angeles, CA), The Oakland Museum (Oakland, CA), and The Museum of the National Center for African American Artists (Boston, MA). Montgomery has also held solo shows in Washington, D.C., Detroit, Philadelphia, Boston, and New Orleans. Her professional affiliations include the Galleries National Conference of Artists (former National Coordinator of Regions and National Conference Coordinator), the College Art Association Women's Caucus for the Arts (honorary life member), and the Carl T. Rowan Chapter of Blacks in Government (BIGCTR).