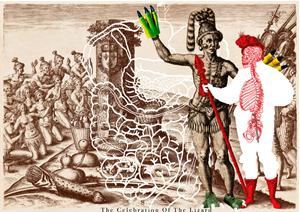 Featuring work by contemporary Brazilian Indigenous artist Denilson Baniwa, exhibition prompts us to reevaluate critical materials from the past.

America is a European invention. Between 1492 and the late 1800s, European conquistadors, travelers, and artists produced prints, books, and objects that illustrated the natural resources and Native peoples of the Americas, often constructing fantastic and fictional ideas. Mixing reality with their own conventions and interpretations, they created portable and reproducible images that circulated around the world, fueling the spread of stereotypes and prejudices.

(Re)Inventing the Americas: Repeat. Erase, Construct, on view August 23, 2022, through January 8, 2023,analyzes the creation of the mythologies that arose during the conquest and exploration of the continents and reveals the influence that those myths and utopian visions have had on defining the Americas.

The exhibition will be divided into thematic sections. The first one will examine the allegorical construction of America and the sources and evolution of these images. The second section will explore the natural wealth of the Americas, while highlighting the exploitation of those resources. The third part will look at the construction of archetypes by analyzing recurring topics, such as the depiction of local people with feathers and hammocks and the portrayal of idolatry and cannibalism. The fourth section will be devoted to images of the conquest, emphasizing the political overtones of certain narratives. The final section will look at the work of European travelers, stressing the differences and commonalities with previous constructions.

The exhibition will feature a collaboration with Denilson Baniwa, a contemporary artist from the Brazilian Amazon region who will generate different artistic interventions throughout the show. Baniwa’s work prompts us to critically reevaluate the materials from the past to help us navigate the colonial traumas, generating new reinventions of the Americas. Additionally, commentary on exhibition objects by Latinx and Indigenous members of the Los Angeles community will give a multi-perspectival approach to the pieces.

“Our collections illustrate the construction of an image of the Americas based on the European perspective,” says Idurre Alonso, curator at the Getty Research Institute. “Thus, it was important to me to analyze and counter that European view by introducing a multilayered presentation of the exhibition objects. To do that, I collaborated with Denilson Baniwa and our local Latin American and Latinx community. Their voices became part of the narrative of the show, challenging the persistence of certain notions. The outcome of these collaborations is a multifaceted exhibition that showcases the complex reinventions of the Americas from the Colonial time to today.”

About Denilson Baniwa
Denilson Baniwa (born April 18, 1984) is an Indigenous artist who was born in the village of Darí, in Rio Negro, Amazonas, in the tri-border area between Brazil, Colombia and Venezuela. His artistic practice includes graphic design, drawings, performances, and urban interventions. His oeuvre seeks points of intersection between Indigenous culture and the contemporary art world. Through his art he questions the colonial past and stereotypical representations of Indigenous people, often layering components from colonial and nineteenth-century art with elements from his own cultural traditions. Some of the themes he approaches include the relationships of Indigenous peoples and technology as well as the harmful effects of agri-business for Native peoples.