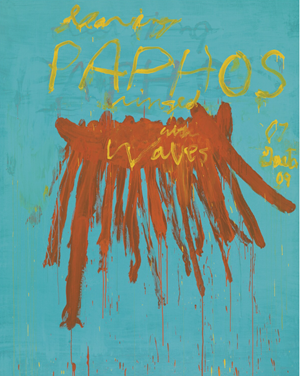 Cy Twombly: Making Past Present, explores the artist’s lifelong fascination with ancient culture through selections of work from different moments of his career.

One of the seminal abstract artists of the late 20th and early 21st centuries, Cy Twombly (1928–2011) drew creative inspiration from Greek and Roman art, myth, and poetry as well as archeological artifacts and ruins.

On view at the Getty Center August 2 through October 30, 2022, Cy Twombly: Making Past Present, explores the artist’s lifelong fascination with ancient culture through selections of work from different moments of his career, tracing a journey of encounters and responses with classical subjects and themes. This presentation also includes, for the first time in a public exhibition, marble and bronze antiquities from the artist’s personal collection.

“The ancient cultures of Greece and Rome were a central point of reference and inspiration for Twombly throughout his career, living as he did for much of his life amongst the spectacular monuments and sculptures of the Eternal City,” says Timothy Potts, Maria Hummer-Tuttle and Robert Tuttle Director of the J. Paul Getty Museum. “Twombly was more of a free-association poet than a scholarly antiquarian in the ways he found to translate the heritage of classical arts and writings into the artistic language of the postwar avant-garde, making the ‘past present’ in startlingly immediate, vigorous, and original ways.”

This exhibition of large-scale paintings, drawings, sculptures, and photographs explores Twombly’s art from across his career through the lens of ancient Greek and Roman culture. Twombly avoided centers of modern art like New York, moving to Italy in 1959. There he engaged creatively with the legacy of antiquity, infusing his work with allusions to mythology, poetry, and archaeology. By exploring the classical past, Twombly followed a long tradition in American and European art. His great contribution lay in linking his understanding of ancient culture to late-20th-century modernist practice, translating historically remote references into a bracingly contemporary artistic idiom.

Twombly was a reader of ancient texts and a student of mythology, poetry, and philosophy. A frequent traveler and expatriate, he took inspiration by seeking out and living among centuries-old sites, monuments, and artifacts. As an artist, he followed in the footsteps of famous predecessors back to the Renaissance, whose creative dialogues with antiquity conditioned his own.

Twombly also loved ancient Greek and Latin poetry. Reading it became part of his creative process, and starting in the 1960s he incorporated poets’ names and verse into his work. His was no straightforward literary transcription, however; he leaves us to puzzle over the relationship between free-floating snippets of poems and an abstract vocabulary of graphic scrawls and painterly blotches. Drifting in and out of legibility, Twombly’s work can come across as elusive, private, and coded, but it also invites the viewer to engage freely and imaginatively, to search for meaning among the scattered signs and gestures.

Twombly traveled throughout his life, not only in Italy but across Europe, North Africa, the Middle East, and central Asia. Travel inspired Twombly’s art, but so too did his domestic environments, which were themselves often historical spaces where he lived casually alongside his own work and the antiquities that he passionately collected. His paintings were sometimes described as “rooms,” which viewers could metaphorically enter, while the actual rooms he inhabited call to mind his paintings: whitewashed, spare yet dynamic, replete with references to worlds old and new.

Words—names, phrases, excerpts of poetry—form a primary element of Twombly’s work. He once said that the graphic notations that abound in his paintings and drawings invite viewers to read aloud and listen as well as to look. “As much as Twombly’s art may seem a radical break with the past, in truth it reveals rich resonances that extend and transform the legacy of ancient Greek and Roman culture,” says Richard Rand, associate director of collections. “Twombly challenges us to rethink our assumptions about the meaning of modern art.”

Cy Twombly: Making Past Present is organized by the J. Paul Getty Museum, Los Angeles, and the Museum of Fine Arts, Boston. The exhibition is curated by Christine Kondoleon, George Behrakis Chair of the art of ancient Greece and Rome at the Museum of Fine Arts, Boston, with the assistance of Kate Nesin, adjunct curator of contemporary art. The Los Angeles presentation is co-curated by Richard Rand, associate director of collections, and Scott Allan, curator of paintings. The exhibition is accompanied by a publication conceived and edited by Kondoleon, Cy Twombly: Making Past Present (Boston: MFA Publications, 2020). The exhibition is supported by an indemnity from the Federal Council on the Arts and the Humanities. Major support in Los Angeles comes from Jo Carole and Ronald S. Lauder, and the exhibition is generously sponsored by City National Bank.