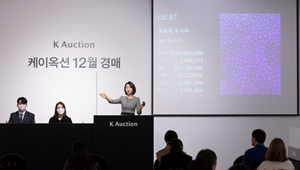 As the art market grows exponentially in South Korea, the tension between primary and secondary players has heightened with galleries uniting to launch an auction event in late January.

As the art market grows exponentially in South Korea, the tension between primary and secondary players has heightened with galleries uniting to launch an auction event in late January, claiming the country‘s major auction houses have violated a “gentlemen’s agreement” struck in 2007.

The Galleries Association of Korea announced Monday that it will hold an auction on Jan. 26 at the Westin Josun Seoul with an aim to protect the art market, particularly young artists. Some 40 percent of the 120 works of art going on the block are by artists represented by participating galleries.

The association’s move was made after “it had warned the two major auction houses” in June not to disrupt the art market and to observe the gentlemen‘s agreement from 2007 when the art market enjoyed an unprecedented boom, according to the association.

“We are not aiming to continue with the auctions permanently, but it is a message that we need to practice good manners as key art market players,” Hwang Dal-sung, chairman of the association, told The Korea Herald. “We are aware of some inappropriate actions taken by the auction houses, such as contacting artists to work directly with auction houses, undermining the role of galleries.”

As the purpose of the upcoming auction is not to make profit, the first auction will not have transaction fees generated from brokerage, he added. Previews of the art ahead of the auction will take place from Jan. 24 at the Westin Josun Seoul.

K Auction and Seoul Auction, meanwhile, remained cautious about the association’s claim, saying they are aware of the issue and that it had been raised last year.

“We don’t have an official statement regarding the issue,” said an official from K Auction. The auction house held 11 major auctions last year, the largest number since it was founded in 2005. It is planning to go public early this year, having submitted an application for a listing to raise up to 32 billion won ($26.8 million) on the secondary Kosdaq exchange.

“We just tried to keep up with the market demand, with an increasing number of people wanting to purchase artworks. We are discussing our stance internally and will make our official comments as soon as possible,” said an official from Seoul Auction.

Culled from a piece by Park Yuna at The Korean Herald