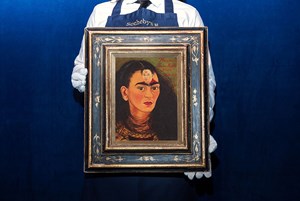 A self-portrait by Frida Kahlo, an artist known for her raw emotional intensity, sold for $34.9 million at Sotheby’s on Tuesday night, setting an auction benchmark for the most expensive artwork by a Latin American artist.

A self-portrait by Frida Kahlo, an artist known for her raw emotional intensity, sold for $34.9 million at Sotheby’s on Tuesday night, setting an auction benchmark for the most expensive artwork by a Latin American artist.

Completed five years before her death in 1954, the oil painting, “Diego and I,” is one of Kahlo’s final self-portraits and an example of the unsettling intimacy that has attracted collectors to her paintings. The work offers a window into her turbulent marriage with Mexican muralist Diego Rivera, who is depicted in it just above the artist’s tearful eyes.

In setting a new high for a Latin American artist at auction, Kahlo surpassed a bench mark set by Rivera in 2018, when one of his paintings sold at auction for $9.76 million — or the equivalent of $10.75 million today, accounting for inflation.

Referring to “Diego and I,” Adriana Zavala, who curated a 2015 Kahlo exhibition at the New York Botanical Garden, said, “This is an important late work from a period where her physical suffering had intensified and her painting became erratic.”

Kahlo, who was born in 1907 in Mexico City, began painting in 1926 while recovering from a bus accident that had left her with chronic pain. She developed a rich iconography touching on the realms of life and death, mixing violence and vulnerability in ways that often shocked viewers by pushing gender norms. She died at 47.

A Sotheby’s spokesperson declined to reveal the identities of either the painting’s consignor or its buyer; high levels of anonymity are typical in the auction world. The winning bid for $34.9 million after fees was taken by Anna Di Stasi, Sotheby’s director of Latin American art. A big sale had been assured even before the auction started because Sotheby’s had accepted both a guarantee and an irrevocable bid, meaning that a third party had already placed a bid that it could not withdraw.

“It’s a museum-quality piece,” said Brooke Lampley, Sotheby’s chair and worldwide head of global fine art sales. She added that cultural institutions had expressed interest in the artwork but that demand from private collectors had been high. “Frida is now on the wish list of collectors who collect great masterpieces of modern art.”

The last time “Diego and I” was sold at Sotheby’s was in 1990, when it became the first work by a Latin American artist to sell for more than $1 million. The value of Kahlo’s paintings has increased substantially since the 1980s, when one of her portraits sold for $85,000. Some art historians attribute the price jump to the increasingly limited availability of her paintings.

“Frida is becoming one of the most popular artists in the world,” said Gregorio Luke, the former director of the Museum of Latin American Art in California. He explained that Mexican laws prevent most sales of prominent 19th- and 20th-century artists, like Kahlo, from within the country. “So the price is the result of massive pent-up interest in the artist and very little inventory,” he said. “There are probably less than 20 to 30 paintings of hers on the market.”

Some admirers watching the auction regarded Kahlo’s ability to surpass her husband’s record as a sign of the times. Often with married artist couples, it is the woman who is forgotten, explained Jorge Daniel Veneciano, senior curator at the Lucas Museum of Narrative Art in Los Angeles. “In terms of gender politics, this is a good thing,” Veneciano said. “Now we might say that Diego Rivera is the husband of Frida Kahlo, because she is outshining him.”

This article originally appeared in The New York Times.