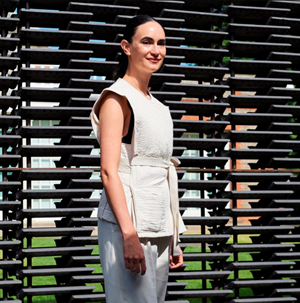 Following a comprehensive international search, The Metropolitan Museum of Art has announced that Mexico City–based architect Frida Escobedo has been selected to realize the Museum’s vision for the Oscar L. Tang and H.M. Agnes Hsu-Tang Wing.

Following a comprehensive international search, The Metropolitan Museum of Art has announced that Mexico City–based architect Frida Escobedo has been selected to realize the Museum’s vision for the Oscar L. Tang and H.M. Agnes Hsu-Tang Wing. The project will encompass a full reimagining of the current modern and contemporary galleries, which The Met has been seeking to revamp for more than a decade, creating 80,000 square feet of galleries and public space. The cost of the renovation is estimated to be $500 million.

In making the announcement, Daniel H. Weiss, President and CEO of The Met, said, “The most generous gift of the Tangs has enabled this next step forward. Frida Escobedo’s impressive and inspiring portfolio of projects and her creative engagement with our team have given us great excitement about this important chapter for The Met.”

“The new wing will be a vibrant, exhilarating space that meets The Met’s current and future needs while promoting a lively representation and reevaluation of the art of the 20th and 21st century in the context of 5,000 years of art history,” said Max Hollein, Marina Kellen French Director of The Met. “Frida Escobedo is an outstanding architect of our time. In her practice, she wields architecture as a way to create powerful spatial and communal experiences, and she has shown dexterity and sensitivity in her elegant use of material while bringing sincere attention to today’s socioeconomic and ecological issues. Already through her partnership, Frida has demonstrated her vision to create enthralling galleries that will challenge the embedded hierarchies of our history and chart a more accessible trajectory for the new wing.”

“As we enter this next exciting phase in the reimagination of how we display The Met’s collection of modern and contemporary art, we look forward to thinking beyond the existing spaces that have confined our ideas to date, to make possible a truly trans-historic and transcultural interpretation of art,” added Sheena Wagstaff, Leonard A. Lauder Chair of Modern and Contemporary Art. “This is a major turning point in how we can make relevant 122 years of modern art within the deep history of The Met’s collections, and to reckon with what the future might bring. Frida will be a great partner for this ambitious project, and it is with pleasure that I anticipate working together with our respective teams to create a building that will be the embodiment of our moment in time architecturally, and a dynamic vision for the 21st century and beyond.”

Jeff L. Rosenheim, Joyce Frank Menschel Curator in Charge of the Department of Photographs, said, “The Tang Wing will enable the Museum’s curators to make critical connections across disciplines in inventive and provocative ways.” Nadine Orenstein, Drue Heinz Curator in Charge of Drawings and Prints at The Met, added, “Frida brings a deep sensitivity to light, materials, and textures. We welcome her to this project with great enthusiasm.”

The reimagination of the wing for Modern and Contemporary Art will enable The Met to approach 20th- and 21st-century art from a global, encyclopedic, playful, and surprising perspective. This bold new vision will result in a building that respects and connects with the Museum’s archipelago of architectural styles as well as its spatial organization and infrastructure. Through flexible gallery spaces, the wing will emphasize the interconnectedness of space and time and suggest a non-chronological narrative.

“The Museum has several key mandates that drive this project and that have guided our search for an architect,” commented Jhaelen Hernandez-Eli, Head of Construction for the Museum. “Frida understands how to create an enduring space for art while reconciling the wing’s relationship with the existing building and park. Additionally, her work draws from multiple cultural narratives, values local resources, and addresses the urgent socioeconomic inequities and environmental crises that define our time.”

Frida Escobedo stated, "The Met is one of the most relevant sites for culture on a global scale, and it is an honor to be selected for this historic architectural reimagining. The Tang Wing presents an opportunity to give new life to the Museum's art from the 20th and 21st century; to celebrate the dynamics we can find within art of different times, geographies, and ideologies; and to uncover new spaces for self-reflection and connection with others. I look forward to working with The Met's teams on this remarkable project."

Escobedo established her eponymous studio in Mexico City in 2006. The studio’s reputation—initially built on the strength of a series of competition-winning projects in her native country, including the renovation of the Hotel Boca Chica (2008), the El Eco Pavilion (2010) and the expansion of La Tallera Siqueiros in Cuernavaca (2012)—has achieved global scope since 2018, when she received the prestigious appointment to design the annual Serpentine Pavilion in London’s Kensington Gardens, becoming the youngest architect at the time to undertake the project. Her practice operates across a wide array of scales and mediums, from buildings and experimental preservation projects to temporary installations and public sculpture, limited-edition objects, publications, and exhibition design. Escobedo is the recipient of numerous accolades, including the Architectural League of New York’s Young Architects Forum Award (2009), the BIAU Prize (2014), the Architectural Review Emerging Architecture Award (2016), and the Architectural League Emerging Voices Award (2017). In 2019, she was honored as an International Fellow of the Royal Institute of British Architects (RIBA), and the studio was named by the architecture magazine DOMUS as one of the world’s “100+ Best Architecture Firms.” In addition to her practice, Escobedo has taught at Columbia University’s Graduate School of Architecture, Planning and Preservation (2015), the Architectural Association of London (2016), Harvard’s Graduate School of Design (2016/2019), and Rice University (2019), and she is currently teaching at Yale University.