Fragonard’s Masterpiece ‘The Swing’ Goes Back on Display After Conservation 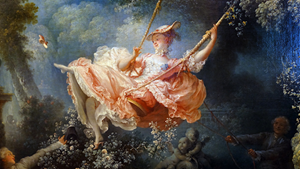 Thanks to a generous grant from the Bank of America Art Conservation Project, throughout the summer of 2021 The Swing underwent intricate, sensitive highly skilled conservation and technical analysis for the first time.

Jean-Honoré Fragonard’s painting, The Swing, is the most iconic painting of the entire Rococo movement and one of the Wallace Collection’s most famous works of art. It has been admired for centuries for its romantic composition, skilful brushwork, and masterly use of colour. References to The Swing can be found in literature, contemporary art, design and cinema. It is sought out and admired by thousands of visitors to the museum each year. Despite its fame, relatively little is known about the painting. The circumstances of its commission are vague, with Fragonard opting to undertake a painting that other ‘academic’ painters had refused on account of its scandalous theme. Fragonard’s methods in building the composition are also unclear. In addition to this, the paint surface was previously obscured by yellowed varnish and old retouching had become visible. Thanks to a generous grant from the Bank of America Art Conservation Project, throughout the summer of 2021 The Swing underwent intricate, sensitive highly skilled conservation and technical analysis for the first time.

Uniquely, the conservation treatment has taken place in house at the Wallace Collection, with one of its conservation studios temporarily transformed especially for the purpose. The work has been undertaken by Martin Wyld, former Head of Conservation at the National Gallery, where he worked for more than 40 years restoring works by artists such as Leonardo and Velazquez. Investigations have shed light on the mysteries surrounding The Swing and developed our understanding of Fragonard and his methods as an artist. The removal of the yellowed varnish has transformed the painting. The white lace of the young girl’s dress is now crisp, the composition has taken on a new sense of depth, background details are now apparent, and the overall freshness and texture of the artist’s paint surface has been restored. Little underdrawing or preparatory studies have been identified. Fragonard appears to have worked confidently and skilfully, directly on the canvas, to create The Swing, his finest masterpiece. The painting is being reinstalled in the specially relit galleries in November 2021, alongside the other seven Fragonard works in the Wallace Collection, allowing visitors to see for the first time how the artist developed across his career. The return of The Swing is accompanied by a special season of events, which encompasses free public talks with special guests, a focused study course, and a book signing.

The Collection has documented the conservation process and commissioned an insightful film exploring Fragonard and The Swing’s influence. Dr Xavier Bray, Director of the Wallace Collection, said: ‘We have approached the conservation of Fragonard’s masterpiece with great sensitivity and an acute awareness of our responsibility to the public to preserve this iconic painting. The results have been astonishing, and Fragonard’s true genius has been revealed. I urge you to visit, look at The Swing afresh and fall in love with Fragonard again.’ Dr Yuriko Jackall, Head of Curatorial and Curator of French Paintings at the Wallace Collection, said: ‘Fragonard is an elusive artist who has fascinated me throughout my career. He is so varied, unpredictable, and accomplished. He left us with remarkably little documentary evidence about his life and working methods, we have therefore sought answers in his work itself. Although more research remains to be done, I am excited about the impact that closer looking at the The Swing will have on the public and Fragonard scholarship generally. Andrea Sullivan, Head of International Environment, Social & Governance at Bank of America said: ‘At Bank of America we believe in the power of the arts to help economies thrive, bring communities together and promote greater cultural understanding. We are delighted to support the conservation of this inimitable masterpiece, restoring it to its former glory, helping to ensure more people will enjoy it for many years to come.’