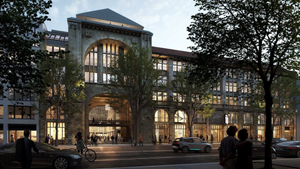 Fotografiska has announced a global expansion to three new locations — berlin, miami, and shanghai — by herzog & de meuron, rockwell group, and neri&hu respectively. Upon completion of the expansion, fotografiska will become the world’s largest privately owned art museum by multiple measures. These include number of locations, number of exhibitions produced per year, and total indoor size.

Each of the new museums will be housed within spectacular contemporary restorations of buildings that are either historically and architecturally significant themselves or characteristic of the neighborhood’s historical fabric.

Fotografiska’s plans for its Shanghai, Miami, and Berlin locations build upon the remarkable architecture of its three existing museums: Fotografiska New York is housed within the landmarked 1894 renaissance revival-style church missions house. Fotografiska Tallinn is in an 1890s factory building characteristic of the Estonian region’s historical fabric. and Fotografiska’s flagship Stockholm home is a landmarked former customs house built in 1906.

Fotografiska Berlin will feature Herzog & De Meuron and Studio Aisslinger renovations of the former Kunsthaus Tacheles, built in 1908. The project is sited in the city’s mitte neighborhood. a pyramdical rooftop extension by Herzog & De Meuron will redefine the building’s silhouette and provide a contemporary beacon, while studio aisslinger’s interior renovation will pay homage to the building, the fotografiska brand, and region’s history through respectful preservation and thoughtful design incorporation of decades of graffiti.

Fotografiska Miami will be housed within a Rockwell group-renovated 1946 factory building across from superblue and adjacent to the Rubell museum. the project is sited in the city’s neighborhood of allapattah (a name derived from the seminole word for alligator). the team will use the rectangular volume of the warehouse as a blank canvas, ‘creating a tapestry of layered planes that define paths of discovery, frame views, and create spaces of varying scale and character for visitors to encounter and create their own journeys.’

Fotografiska Shanghai will see renovations by Neri&Hu 1931 of a warehouse on the suzhou creek waterfront, a rapidly developing cultural district unified by a pedestrian promenade. fotografiska shanghai will be housed within one of four waterfront historical warehouses that were built in the early twentieth century as reception hubs for goods brought into shanghai from the city of suzhou. the classified historical building adopts the period industrial design, including two magnificent staircases that will be a preeminent feature of the site.

This global expansion follows the museum’s early-2021 merger with private work and social space, neuehouse, and the formation of their parent company, cultureworks. the three new locations will each embrace fotografiska’s status as a museum experience for the modern world, combining immersive photography exhibition spaces with eclectic cultural programming, lively dining and drink establishments, and smartly curated museum shops.

Josh Wyatt, CEO of fotografiska comments: ‘It is a real honor to call these remarkable landmarks the dwellings of fotografiska, and we are humbled by the opportunity to reimagine such important buildings. We have been very intentional on our path toward global expansion, and have thoughtfully identified these cities for their flourishing cultural scenes, passion for photography, and forward-thinking attitudes on the future of immersive art experiences. we are thrilled to meet our new neighbors and guests.’