Following Conservation Treatment, 'The Triumph of Silenus' is Discovered to be a Nicolas Poussin Original 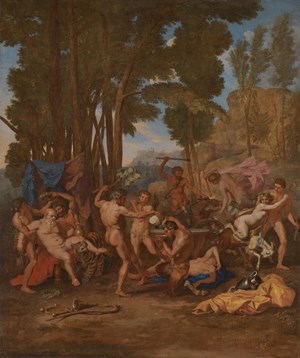 ‘The Triumph of Silenus’ was one of the first paintings to enter the National Gallery Collection in 1824. Once considered autograph, that is by the hand of Nicolas Poussin (1594–1665), the painting has long been plagued by questions of authenticity.

‘The Triumph of Silenus’ was one of the first paintings to enter the National Gallery Collection in 1824. Once considered autograph, that is by the hand of Nicolas Poussin (1594–1665), the painting has long been plagued by questions of authenticity but, following recent conservation treatment and in-depth technical analysis, it can be fully reattributed to Poussin, the leading French painter of the 17th century. 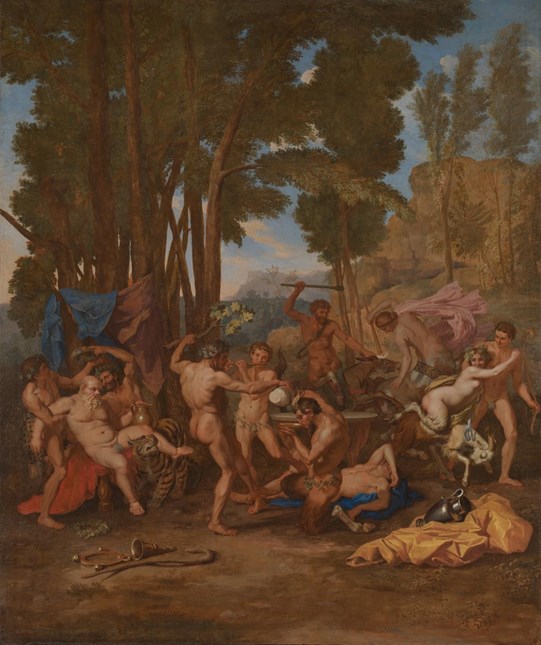 This means that the National Gallery now holds 14 autograph works by Poussin, making it one of the world’s leading collections of paintings by the artist. This autumn, this picture will feature in Poussin and the Dance, the first exhibition ever dedicated to dance in the artist’s work (the National Gallery, 9 October 2021 – 2 January 2022).

This riotous scene celebrates Silenus, Greek god of wine and drunkenness, and companion to the god Bacchus. Silenus, a naked old man with a bald head, sits slumped on a throne to the left, supported by two attendants. Too drunk to stand, he balances one leg precariously on a tiger. Around him, revellers drink and dance. The flute player in the centre stares towards us, inviting us to join the party. On the right, a shepherd seduces a female satyr, who symbolises lust. In the background, two centaurs attack an ass. The idealised and muscular physique of the men reveals Poussin's study of statues from Classical antiquity.

This painting was commissioned around 1635–36 by Cardinal de Richelieu (1585–1642), the powerful French minister, for his château in Poitou. Its companions, The Triumph of Pan (also in the National Gallery) and 'The Triumph of Bacchus' (now in the Nelson-Atkins Museum of Art, Kansas City), were painted at around the same time and originally hung in the same room, the Cabinet du Roi. At some point before 1741 all three bacchanalian scenes were replaced with copies (now in the Musée des Beaux-Arts, Tours) and taken to England.

The 'Triumph of Silenus' was considered an autograph work by Poussin when it was first purchased by the National Gallery and this view persisted for some time. By the middle of the 20th century, however, doubts had surfaced about its attribution to Poussin. This was, in part, due to the painting's uneven finish and discoloured varnish: the palette appeared rather dull, and some figures seemed quite coarsely painted, especially when compared to the high level of finish and tight composition seen in the triumphs of Pan and Bacchus. It was suggested that this was just one of several copies after Poussin’s lost original. Since at least 1946, the work has been described as ‘after Nicolas Poussin.’

However, recent conservation treatment and technical analysis have transformed our understanding of the picture. Without its discoloured varnish, the painting is once again bright, and the handling of certain key figures, such as the kneeling satyr and the female satyr on the right, is much closer to that seen in the other two 'Triumphs'. Imaging techniques have revealed changes (or pentimenti) made to the composition during the painting process, which undermines the argument that this work is a copy of an already finished work. Comparison of the pigments used in both the 'Pan' and 'Silenus' shows extremely similar mixtures and components which would be difficult to explain across two unconnected paintings. These findings, plus the discovery made by scientists at the Nelson-Atkins Museum of Art that all three paintings were painted on canvas from the same bolt, argue strongly that the London 'Silenus' was produced in the same workshop as the other 'Triumphs' and is indeed Poussin’s original.

Francesca Whitlum-Cooper, The Myojin-Nadar Associate Curator of Paintings1600–1800, says: ‘The three 'Triumphs' Poussin painted for Cardinal de Richelieu play such an important role in the artist’s career: it was on the strength of these works that he was summoned back to France to paint for the King, which is what ultimately led to his being seen as the founder of the French School of painting. Poussin only painted a handful of these riotous dancing scenes, so it is fantastic to have rediscovered this original work in time for the first exhibition of his dance pictures.’

Dr Gabriele Finaldi, Director of the National Gallery, says: ‘Thanks to the work of the Gallery’s curators, conservators and scientists, the painting has been recognized as Poussin’s original. This is a very pleasing outcome of our ongoing research into the Gallery’s collection.’