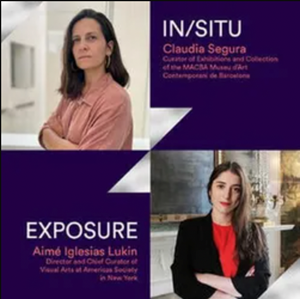 Lukin will curate a presentation focused on heralding emerging artists and exhibition programs, with counsel from the Selection Committee and exposition’s directors.
"As a convener of international modern and contemporary art for the region and beyond, EXPO CHICAGO foregrounds rigorous programming that supports diverse curatorial perspectives throughout all facets of the exposition," said Kate Sierzputowski, Director of Programming at EXPO CHICAGO. “Claudia and Aimé’s appointments as program curators for our 10th anniversary edition will continue this legacy, bringing global presentations to IN/SITU and EXPOSURE programs through the unique lens of two remarkable curators.”

In her role at the Americas Society, Lukin steers the institution and exhibitions through her expertise in topics of travel, exile, and identity in art from Latin America. Previous to serving in her current role at the Americas Society, New York, Lukin held positions at the Metropolitan Museum of Art in New York, the Institute for Studies in Latin American Art, and the Fundación PROA in Buenos Aires. She recently completed her Ph.D. in art history at Rutgers University with a dissertation titled, “This Must Be the Place: Latin American

Artists in New York 1965–1975,” which maps the international networks through which migrant artists from across the hemisphere created communities in the metropolis.
"I look forward to joining EXPO CHICAGO in showcasing young artists and galleries from all over the world in the cosmopolitan and diverse environment of a city like Chicago, contributing to creating a space for exchange that enriches our cultural and intellectual experiences of art," said Lukin. "I hope that my knowledge in the field of Latin American and Latinx art particularly can offer increased visibility to other diversities and communities, to mutually learn in dialogue."

Lukin follows the 2022 EXPOSURE Curator Humberto Moro, currently Deputy Director of Program at Dia Art Foundation in New York and previously Deputy Director and Senior Curator at Museo Tamayo in Mexico City.
At MACBA, Segura drives the exhibition program and collection of a leading contemporary art institution, focusing on global creative practices with an emphasis on local production. In addition to her role at MACBA, Segura is part of various research platforms such as Devuelta y vuelta and Para abrir boca. She has curated and co-curated projects including To be known as Infinite: María José Arjona, MAMBO, Bogotá (2018); Here the border is you, ProyectosLA, Los Angeles (2017); Límites Nómadas, Biennial of the Borders of Mexico (2015); Fifty (Pipilotti Rist) from Han Nefkens H+F Collection, Collectorspace, Istanbul (2014); Copy/Paste – Recodifying the gesture, Instituto Cervantes, London; Like Tears in Rain, Palace of the Arts, Porto; and Producing Urban Order, Goldsmiths University, London (2008). She also served as the Editorial Coordinator of Florae 2015, magazine of Flora ars + natura, Bogotá, and continues to write regularly for diverse specialized arts platforms.

"As curator of the upcoming IN/SITU program at EXPO CHICAGO, I will work with contemporary artists from around the world to activate the architecture of Navy Pier through installation, in a presentation that seeks to hybridize pedagogical methodologies while highlighting performative understandings and collective productions," said Segura. "The vibrance of Chicago has always been of great curatorial interest to me, and it is through this framework I seek to bring a decolonial perspective to this position and integrate other manners of curating using the potential of poetics and the political tool of fabulation."
Segura follows the 2022 IN/SITU Curator Marcella Beccaria, Chief Curator and Curator of Collections at the Castello di Rivoli Museo d’Arte Contemporanea in Rivoli-Torino, Italy.

About Aimé Iglesias Lukin
Aimé Iglesias Lukin is the Director and Chief Curator of Visual Arts at Americas Society in New York. Born in Buenos Aires, she received her Ph.D. in art history from Rutgers
University with a dissertation titled “This Must Be the Place: Latin American Artists in New York 1965–1975,” which she presented as a two-part exhibition and a book at Americas Society in 2021 and 2022. She completed her M.A. at The Institute of Fine Arts at New York University, and her undergraduate studies in art history at the Universidad de Buenos Aires. Her research received grants from the Smithsonian American Art Museum, the Metropolitan Museum of Art, the Terra and Andrew W. Mellon Foundations, and the ICAA Peter C. Marzio Award from the Museum of Fine Arts, Houston. She curated exhibitions independently in museums and cultural centers and previously worked in the Modern and Contemporary Art Department of the Metropolitan Museum of Art, the Institute for Studies on Latin American Art, and Fundación PROA in Buenos Aires.

About Claudia Segura
Claudia Segura is the Curator of Exhibitions and Collection of the MACBA Museu d'Art Contemporani de Barcelona. She previously held positions as the Director and Chief Curator of NC-arte in Bogotá, Colombia (2015-2019), where she curated several exhibitions and site-specific projects by different artists (Amalia Pica, Luis Camnitzer, Xavier Le Roy, Nicolás Paris, Nicolás Consuegra, Los Carpinteros, Alia Farid, among others).
She was coordinator of cultural initiatives at the Fundació "la Caixa," Barcelona (2010- 2012); an external curator of the Mardin Biennial, Turkey (2014-2015); and mentor of the Sala d’Art Jove, Barcelona (2014), and at the Cano Laboratory at the Art Museum of the National University of Colombia (2018). In addition, she has been a visiting lecturer at the National University of the Andes, Bogotá (2017).