Exploring the Concept of "WE", Thomas Houseago Presents Works by Nick Cave and Brad Pitt Alongside His in New Exhibition 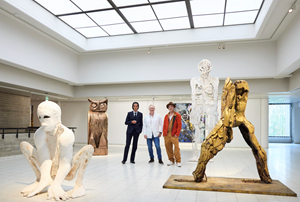 Thomas Houseago is presenting his own sculpture and paintings alongside a ceramic series by Nick Cave and sculptures by Brad Pitt. This is the first time ever they have exhibited their artwork – pieces which were created during the course of an ongoing dialogue with Houseago.

Sara Hildén Art Museum is proud to present Thomas Houseago’s first exhibition in the Nordic countries. Thomas Houseago is a world-renowned artist, known for sculptures in plaster, rebar, bronze and wood. For this exhibition, the British-born artist is also presenting new paintings and sculptures in redwood and plaster including responding to work in the collection of the Sara Hildén Foundation, Alberto Giacometti’s (1901–1966) sculpture Woman on a Chariot (1943, 1962).

During the last couple of years, Houseago has discovered painting, which has offered a form of liberation for him. The exhibition will feature his large-scale, expressive paintings from his Visions series, which he produced outdoors, focusing on subjects such as nature, landscape, cosmic unity and the cycle of life. These works are also deeply personal to the artist and at the same time they are related to the landscape tradition of European art. Connections can also be found to Norwegian symbolist Edvard Munch (1863–1944).

For Houseago, creativity is fundamental, common to all people and flowing in all of us. For this exhibition, the artist has taken a radical response to the invitation for the exhibition at Sara Hildén Art Museum. By including artworks by his creative associates, he introduces the concept of WE, recontextualizing the concept of original creation to challenge the idea of the artist as a solitary individual and celebrate a more collectivist approach. Houseago is presenting his own sculpture and paintings alongside a ceramic series by Nick Cave and sculptures by Brad Pitt. Cave and Pitt are already renowned in their respective fields of music and cinema, but this is the first time ever they have exhibited their artwork – pieces which were created during the course of an ongoing dialogue with Houseago. 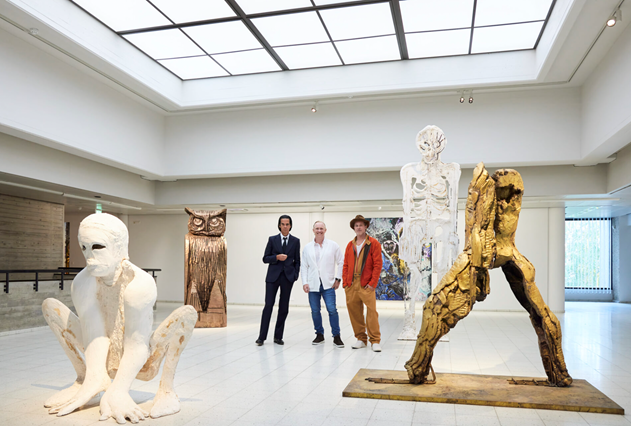 Although each body of work remains individually authored, their presentation under the collective title reflects the connected nature of the works and their makers. WE is an open-ended concept that encourages new ways to think about art-making and the role of the solitary artist, which are less about ideas born exclusively to a single author. Houseago sees WE as an incorporation of all artforms and anyone he might connect with creatively. With the ultimate aim to spread hope and inclusiveness, the parameters and participants of WE may expand, yet with its beginning here with three figures each widely recognized for their individual talent, by challenging the need for such distinctions the message of WE is emphatically underscored.

Houseago aims to give greater recognition for the myriad elements and human interactions that feed into the creation of each artwork. His studio has long been a place of interaction and conversation, with social spaces prominently built into its fabric, its function and physical character provided the basis for Cast Studio (2018), a sculpture that was a stage for performance and a forum for discussion, which sits at the center of the exhibition at Sara Hildén Art Museum. The conversations and dynamics that fed into and followed Cast Studio are part of the genesis of WE.

Talking of his recent experiences, Houseago speaks of an impactful move away from the ego-driven modes of thinking to a profound realization that “I am not an I. I’m a WE!”. Houseago embraces the interconnected nature of all things, in the creative process and beyond. He extols the benefits of a centuries-old logic, which concludes that if no single thing arises independently then we must all be connected, which therefore allows us to transcend whatever limitations result from a sense of self.

The ego and sense of self are referenced in various works, such as ‘Vision Painting II – Soul Visit – Dead Self & Before Birth’ and ’Psychedelic Construction Masks’. Also, in older works such as Houseago’s recognisable figure of the Squatting Man (2005), a plaster cast of his own physical form, which might be read in this context as a hard, yet empty carapace shed by its inhabitant.  In his Soul Houses, Houseago creates sculptural representations of psychological interiors from cardboard boxes with the removal company branding visible to poetic effect. These imagined environments sit alongside more figurative ‘Vision Paintings’ that testify to the artists’ journey of discovery through both the psychological interior and physical exterior.

The sculptural processes that led to the work of each artist here, in different ways represent stages of becoming, transformation and transfiguration over time.  In the work of Nick Cave this transformation is more literally conveyed via a narrative series of glazed ceramic figurines depicting the life of the Devil in 17 stations, from innocence through experience into confrontation of our mortality. The Devil – A Life is Cave’s first major body of visual work. It includes 17 individual pieces ranging between 15 and 50 cm tall, each hand-crafted, painted and glazed by Cave in England, between 2020 and 2022.  Aesthetically the series nods to the artist’s interest in Victorian Staffordshire Flatback figurines, of which he is a collector. Cave was assisted with the series by Corin Johnson.

Also presented in public for the first time, a range of sculptural works by Brad Pitt includes – amongst other works – a molded plaster panel depicting a gunfight narrative scene, cast using multiple impressions of the human body, as well as a series of plinth-mounted, house shaped sculptures molded in clear silicone that each have been shot with a different gauge of ammunition, revealing its trajectory and freeze framing the destructive motion. Another house structure – Pitt’s first ever sculpture, entitled House A Go Go (2017) – is a 46 cm tall composite of timber off-cuts.