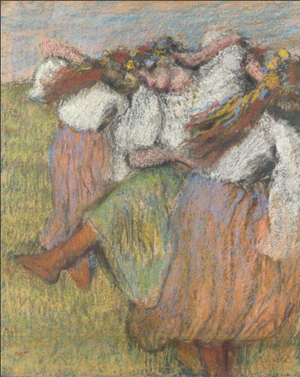 A popular drawing by Edgar Degas has been renamed to reflect its Ukrainian heritage, after concerns were raised about the 'lazy' mislabelling of art as Russian. The work, which used to be ‘Russian Dancers’ has been renamed Ukrainian Dancers by the National Gallery in London, after calls on social media from Ukrainians.

The French impressionist’s piece features dancers wearing Ukrainian folk dress in a field, with blue and yellow ribbons in their hair and garlands in their hands — the colours of the Ukrainian flag. The dance troupe from Eastern Europe visited Paris in the late 1890s and performed at the French capital’s most famous venues, including the Moulin Rouge.

The National Gallery spokespersons said that the 1899 pastel image's name has been an ongoing point of discussion for many years. Its title has also been discussed in scholarly literature, they said. But the ongoing war in Ukraine has prompted an increased focus.

The name of the piece is reported to have been flagged a few weeks ago by a member of the National Gallery's education department, as well as Tanya Kolotusha, a Ukrainian living in London.

Ms Kolotusha wrote on Instagram: 'Should we wait for Ukraine to win the war before starting a grand change on the cultural front?'

The decision to rename the work has been supported by Mariia Kashchenko, the Ukrainian-born founder and director of The Art Unit, which is currently showcase its first release of 21 emerging artists from Ukraine.

The National Gallery is continuing to research its collection's history, and will be updating information about each work as and when more information is available.

It has no other works in its collection with Ukrainian heritage, and no other pieces are expected to be renamed.