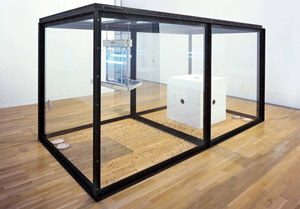 People for the Ethical Treatment for Animals (PETA) are always at the forefront when it comes to taking part in many animal rights reforms. This time, in another historical step, they decided to fight for the rights of flies.

People for the Ethical Treatment for Animals (PETA) are always at the forefront when it comes to taking part in many animal rights reforms. This time, in another historical step, they decided to fight for the rights of flies. Yes, you heard it right. A museum in the German city of Wolfsburg had to recently remove an art installation following PETA’s complaint that the installation killed flies.

According to reports, this art installation used a fly-killing UV light. This art piece was titled A Hundred Years (1990) and was built by award-winning artist and entrepreneur Damien Hirst. The concept behind A Hundred Years is that flies die when exposed to public light. It consists of a transparent cube. This cube is split into two areas. On one side, flies hatch and the other part shows a UV lamp hanging from the ceiling. Flies are attracted to light. Whenever they go towards it there is a small hole between both areas, flies are burned to death. According to Damien, this art installation describes a life circle in a box.

This courted criticism from PETA. After PETA’s complaint, this was removed from Kunstmuseum Wolfsburg museum. In the complaint, PETA said that this art piece infringed on Germany’s Animal Welfare Act. According to this act, killing or harming animals is banned without any proper reason. It remains to be seen whether flies are covered in this act or not.

This is not the only time Damien’s artworks have attracted controversy. In one of the specimens, he used a dead cow that attracted flies. According to reports, he used a total of one million dead animals in his art.