Cuban-American Abstract Artist, Carmen Herrera, Who Gained Fame at 89 Passes Away at 106 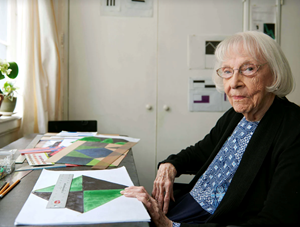 Cuban-born artist Carmen Herrera, whose radiant colour and geometric paintings were overlooked for decades before the art world took notice, has died at the age of 106.

Cuban-born artist Carmen Herrera, whose radiant colour and geometric paintings were overlooked for decades before the art world took notice, has died at the age of 106.

Artist Antonio Bechara told The New York Times that Ms Herrera had died at her Manhattan home on Saturday.

Fame finally came for Ms Herrera at the age of 89, when she sold her first painting in 2004. It may have taken 60 years for her to be discovered, but today her paintings – minimalist compositions of straight lines, form and colour – are found in permanent collections of major museums including the Whitney Museum of American Art and the Museum of Modern Art in New York and the Tate Modern in London.

“The core to Carmen Herrera’s painting is a drive for formal simplicity and a striking sense of colour,” according to a spokesperson at the London-based Lisson Gallery.

“A master of crisp lines and contrasting chromatic planes, Herrera creates symmetry, asymmetry and an infinite variety of movement, rhythm and spatial tension across the canvas.”

In 2009, the Observer asked: “How can we have missed these beautiful compositions?”

Ms Herrera said she painted because she had to. “It’s a compulsion that also gives me pleasure,” she said in 2009. “I never in my life had any idea of money and I thought fame was a very vulgar thing.

“And at the end of my life, I’m getting a lot of recognition, to my amazement and my pleasure.”

Born in Havana, Cuba, in 1915, Ms Herrera was the daughter of the founding editor of the Havana-based newspaper El Mundo and a mother who was a reporter. She studied architecture at a university in Havana, and moved frequently between Cuba and Paris during the 1930s and 1940s.

She trained at the Art Students League in New York where she settled in the mid-1950s after marrying Jesse Lowenthal, a teacher of literature at Stuyvesant High School. He died in 2000.

Working as a female artist in post-war America was a difficult challenge, she said. “People were not ready to receive my work,” Ms Herrera told the Observer in 2010.

She recalled how an avant-garde New York gallery owner told her bluntly: “Carmen, you can paint circles around the men artists that I have but I’m not going to give you a show because you’re a woman.”

But being an unknown artist had its advantages, she said; it meant she could work to please herself, not someone else.

In the late 2000s, she had solo exhibitions at the Museum Pfalzgalerie Kaiserslautern in Germany and the Ikon Gallery in Birmingham, and a decade earlier at the Museo del Barrio in New York.

Ms Herrera’s art is also found in many other museums including the Hirshhorn Museum and the Smithsonian American Art Museum in Washington, as well as the Walker Art Centre in Minneapolis.