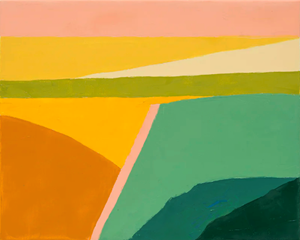 Colour as Language was developed in close collaboration with the artist herself: before Adnan’s death in November 2021, the museum spoke with her on numerous occasions regarding her life, work, and Van Gogh.

The exhibition focuses on Adnan’s colourful paintings, which are presented alongside ten works by Vincent van Gogh, who was a source of inspiration for Adnan. Colour as Language was developed in close collaboration with the artist herself: before Adnan’s death in November 2021, the museum spoke with her on numerous occasions regarding her life, work, and Van Gogh. Her own words are a theme throughout the exhibition.

Colour as Language explores the connection that both artists felt with nature, their intense use of colour as a form of expression, and the role of language in their lives and work.

An encounter with Van Gogh

Adnan’s work is inextricably linked with her mixed cultural background and the fact that she lived in so many different places around the world: language and culture are essential concepts in her oeuvre. Adnan started her career passionately writing poetry and award-winning books about her native country of Lebanon. She had previously studied philosophy at Sorbonne University in Paris, which is where she had her first encounter with Van Gogh:

‘It was a big shock for me to see Van Gogh’s work for the first time. It must have been in Paris in the early fifties. Coming from Beirut, I had never even seen any reproductions of art – we had no museums in Lebanon. […] I remember his self-portraits. I was amazed that a person could look at himself with such precision, such intensity, to an unbearable degree. That shock never disappeared.’

Adnan started painting around her 34th birthday. At the time, she was living in California and teaching the philosophy of art. Adnan’s poetry in French, and later English, often reflects on the horrors of war, yet she said that her visual work shows her cheerful side. It is in these works that Adnan found a universal language, with colours instead of words:

‘Colours make visible what the person is trying to say, but silent.’

The world in colour

Colour as Language features 78 of Etel Adnan’s works, 72 of which have never before been on public display in the Netherlands. A number of untitled paintings, which Adnan made in the late 1960s, offer insight into the artist’s earlier work. Many of these paintings, from collections including those of the Lille Métropole Musée d’art moderne, d’art contemporain et d’art brut and the Centre Pompidou, are abstract combinations of areas of colour, and reveal how to Adnan, colour was an entity in itself. Her later works are smaller, and feature landscapes.

Adnan believed that nature expressed itself most powerfully in colour, and she considered Van Gogh to be the first artist to dare to apply this in his art. Adnan said that Van Gogh paved the way for subsequent generations of artists. In the exhibition, Orchards in Blossom, View of Arles (1889) is displayed alongside Adnan’s Landscape (c. 1990), an extraordinary loan from a private collection in Lebanon. The painting has never before been exhibited in America or Europe. Works such as California #9 (2003) from Museum Voorlinden and Calm Landscape (2013) from the Musée de l’Institut du monde arabe show Adnan’s favourite way of capturing nature.

‘I don’t know if you’ll understand that one can speak poetry just by arranging colours well.’ - Vincent van Gogh, 12 November 1888

Mountains and the sun

After Etel Adnan returned to California in 1980, Mount Tamalpais became the central to her oeuvre. In her drawings and paintings, she made countless new interpretations of this mountain, which she looked out on from her house in Sausalito. Colour as Language features more than 30 such works, including the painting Mount Tamalpais (1985), a remarkable loan from the Nicolas Ibrahim Sursock Museum in Beirut. This painting has never before been offered on loan.

In addition to this mountain, the sun plays a significant role in her work: one of her most vivid memories of her youth in Beirut. Adnan saw the sun as the ‘architect of the landscape’, in her own work and that of Van Gogh, as in The Sower (1888). The sun – depicted by Adnan as a crimson circle or square – frequently appears in paintings such as Landscape (2014) and other loans from the Centre Pompidou and Mudam Luxembourg.

There were no museums in the Lebanon of Adnan’s youth, but there were Persian carpets. Together with her father, she visited the carpet traders at the bazaars. The fabrics were Adnan’s first introduction to art. She came to see no difference between a painting, a carpet and a painted vase. It was all art and equally valuable. Three tapestries designed by Adnan will be on display in the exhibition. These colourful tapestries, which Adnan also called ‘hanging gardens’ will be presented alongside works by Van Gogh such as Garden of Saint Paul’s Hospital (‘Leaf-Fall’) (1889) and Tree Roots (1890).

Van Gogh and Adnan both had a masterful command of language. For Adnan, the leporello (a book with folded concertina-style pages) was the ideal means of uniting images and language. The exhibition features five leporellos, including Journey to Mount Tamalpais (2008), a vibrantly illustrated work to which Arabic text has been added.

In a letter to his brother Theo on 28 May 1888, Van Gogh also mentioned leporellos. In the letter, which is on display in the exhibition, he outlined his burgeoning ideas for ‘albums of original Japanese drawings’ with scenes of the Southern French landscape near Arles. His drawing The Enclosed Wheatfield after a Storm (1889) reveals just how much his drawing style resembled handwriting. ‘Drawing is writing and writing is drawing’, in Adnan’s words. She said that you do both with the same movement of your hand and arm, and letters are actually drawn shapes.

In her written work, Adnan spoke out about war and violence in her native country of Lebanon and elsewhere in the world. Her visual work also sometimes hints at her preoccupation with existential concerns. The series The Weight of the World, from which five paintings will be on display in Colour as Language, and works such as Satellites 12 (2020), reveal Adnan’s fascination with the cosmos and the vulnerability of our planet.

It was only at the age of 87 that Adnan received international recognition for her art, at the Documenta in Kassel in 2012. When she died in Paris nine years later, on 14 November 2021, she left behind an oeuvre that is now read and exhibited all around the world. Colour as Language is the first and only exhibition in which works by Van Gogh and Adnan can be seen side by side. The exhibition is only on display in Amsterdam.

Colour as Language was realised with the support of the Ministry of Education, Culture and Science and the museum’s main partners: the VriendenLoterij, Van Lanschot and ASML. The exhibition was also supported by the Institut Français and the Rabbani Foundation.