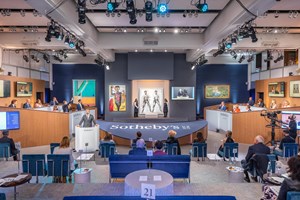 On May 12, 2021, Claude Monet’s $70.4 Million Water Lilies Painting was the leading sale at Sotheby's Marquee Evening Sales in New York which sold a total of $600 million.

On May 12, 2021, Sotheby’s New York saleroom, redesigned for the occasion by Hamilton set designer David Korins, welcomed a limited number of clients for a series of gala-style sales that brought together in-person and digital experiences as never before, with results to match:

Together, the three sales staged that evening realized $597 million (total pre-sale estimate across all three sales $439.4/603.8m), bringing the overall total auction sales at Sotheby’s worldwide this week to $672,897,518, with additional sales taking place in Geneva, London and Paris. Sotheby’s Day Sales of Impressionist, Modern and Contemporary Art are still to come this week.

Participants were from 43 countries

Across all three sales: 93% sold by lot

Every paddle raised in this evening’s sale paid homage to Mrs. Marion’s remarkable life - her boundless energy and limitless spirit of inquiry.”

Gerhard Richter’s Abstraktes Bild was underbid by one collector in Asia, and sold to another for $23.2 million (est. $14/18 million)

“The tremendous result for Basquiat reaffirms his position as the preeminent and most sought-after artist in the market right now. There is no question, Basquiat’s now stands alongside Andy Warhol, Pablo Picasso, and other great artists of the 20th century.”

Jean-Michel Basquiat’s Versus Medici – see above

Robert Colescott’s George Washington Carver Crossing the Delaware shattered his previous auction record ($912,500) by more than 16 times. The painting sold for $15.3 million (estimate $9/12 million) after a seven-minute bidding battle, to the Lucas Museum of Narrative Art

Banksy's Love is in the Air sold to applause after a 14-minute bidding battle for $12.9 million (estimate $3/5 million) - the second-highest auction price for the artist

“Tonight’s sale is a resounding vote of confidence in the Impressionist & Modern art market, with strong global demand for the roll call of great names we were able to present.”