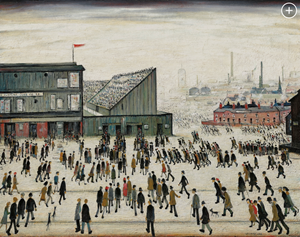 On 19 October, that work is being offered in the Modern British & Irish Art Evening Sale at Christie’s in London by football charity The Players Foundation.

On 19 October, that work is being offered in the Modern British & Irish Art Evening Sale at Christie’s in London by football charity The Players Foundation. Proceeds from its sale will support current and former professional footballers who are experiencing dementia, poverty or other hardships.

It combines two of the artist’s most popular and enduring subjects: the industrial landscape of his native northwest England, and the role that sport (especially football) played there. Lowry depicted a large crowd congregating, from various directions, at Burnden Park stadium, the ground of Bolton Wanderers, one of England’s oldest clubs — and, at the time, among the leading clubs in the country.

As a boy, he had been encouraged by his father — who ran a local youth team — to take up football. He never excelled as a player, but maintained a great interest in the sport throughout his life. Lowry’s home of several decades, located in a suburb of Manchester called Pendlebury, was just a few miles from Burnden Park.

As its title suggests, Going to the Match  features not a game actually being played, but a plethora of fans making their way to the ground before its start (or, in some cases, already gathering in the stands). Typically for Lowry, as a great observer of human life, his fascination is with the massed fans and their collective behaviour.

Where the structure of the stadium dominates the left of the picture, an industrial landscape of mills, factories and terraced houses can be made out receding into the background on the right.

For much of Lowry’s career, a local factory worker’s schedule was pretty fixed: a five-and-a-half-day week, which ended at around noon on Saturday, followed by an hour or so’s refreshment in the pub, and then travel to watch a sports match (football or rugby league in the winter, cricket in the summer).

Lowry once said that his artistic ‘ambition was to put the industrial scene on the map, because nobody [before] had seriously done it’. He realised that ambition most famously with his depictions of worker activity from Monday to Friday. However, he also realised it with a number of paintings of people off duty, watching or playing sport.

In 2011, one notable example — The Football Match (below) — sold at Christie’s for £5.6 million, currently the joint-highest price ever paid for a work by Lowry at auction.

Painted four years later, Going to the Match  is, alongside The Football Match, the largest and arguably finest of his pictures dedicated to sport. It has been on long-term loan at The Lowry arts centre in Salford, and in 2013 was a centrepiece of the artist’s retrospective at Tate Britain, Lowry and the Painting of Modern Life.

According to the late art historian Tom Rosenthal, Going to the Match  ‘made a generalised point about the common man and how [attending a football game] brought some colour and joy’ into his otherwise work-dominated life.

Attendance also brought fans a united sense of purpose, through loyal support of the same team — whether it was in the midst of a period of success or one of failure. That unity is subtly articulated by the hundreds of figures on the picture’s right, who are forced to lean in together against a strong wind. (Such weather is also signalled by the red pennant blowing fiercely atop the stadium.)

Like he did for many of his paintings, Lowry adopted a somewhat elevated and distanced viewpoint for Going to the Match. This was a practice partially indebted to the 16th-century Netherlandish master Pieter Bruegel the Elder, one of the few artists whom Lowry acknowledged as an influence.

This wasn’t the only similarity between the two artists’ imagery. Both were fascinated, arguably above all, by the deportment of people in a crowd. In Going to the Match, the football game, ostensibly the main event, is downplayed in favour of the fans on their way to see it — just as the sight of Christ carrying his cross is all but lost amidst the masses on the hillside in Bruegel’s The Procession to Calvary (1564), above.

At its peak, Burnden Park had a capacity of 70,000. It seems likely, though, that for many matches the number of fans exceeded this.

Lowry himself wasn’t actually a Bolton Wanderers supporter. He preferred a different local team, Manchester City, and this is another factor to consider when it comes to his — and, consequently, our — slightly detached view of the scene in Going to the Match. Lowry wasn’t part of that particular crowd, rather an observer of it.