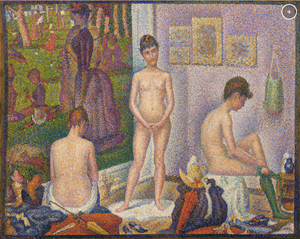 Christie’s and the estate of the philanthropist and co-founder of Microsoft, Paul G. Allen, are honored to unveil highlights from Visionary: The Paul G. Allen Collection, featuring 500 years of groundbreaking art.

Christie’s and the estate of the philanthropist and co-founder of Microsoft, Paul G. Allen, are honored to unveil highlights from Visionary: The Paul G. Allen Collection, featuring 500 years of groundbreaking art.

The highlights will be part of an unprecedented $1 billion sale across two live auctions at Christie’s Rockefeller Center beginning November 9th. The auctions will offer a comprehensive study of the art historical canon in more than 150 masterworks. All of the estate’s proceeds from this historic sale will be dedicated to philanthropy, pursuant to Mr. Allen’s wishes.

A visionary and innovator, Paul G. Allen collected art of the finest caliber, acquiring superb pieces by the world’s most iconic artists. The sale will include examples, often among the finest in private hands, by Jan Brueghel the Younger, J.M.W. Turner, Edouard Manet, Vincent Van Gogh, Georges Seurat, Paul Gauguin, Claude Monet, Gustav Klimt, Georgia O’Keeffe, Francis Bacon, Lucian Freud, and many others. The collection reflects the pioneering work of artistic visionaries through their expression of paint, light, portraiture, and place.

Max Carter, Vice Chairman, 20th and 21st Century Art, Americas, remarked: “The Paul G. Allen Collection, like Cézanne’s breathtaking view of Mont Sainte-Victoire, is the summit of the mountain. From Brueghel’s Five Senses and the Venetian imaginings of Turner and Manet, to late 19th-century masterpieces by Van Gogh, Gauguin and Monet, Klimt’s Birch Forest and Freud’s Large Interior, W11 (after Watteau), arguably the greatest set piece of the last fifty years, the Collection is bounded only by vision and quality. And then there is Seurat’s Les Poseuses. Formerly in the collections of Alphonse Kann, John Quinn and Henry McIlhenny and featured in the 1913 Armory Show, when it appeared at auction for the one and only time in 1970, the art historian John Russell suggested that it was one of the three or four most beautiful works of art to be sold since the war. It remains so today.”

Marc Porter, Chairman, Christie’s Americas, commented, “This is an unprecedented moment, worthy of the collector and the artists whose work he pursued. ‘Visionary: The Paul G. Allen Collection’ brings together masterpieces in support of philanthropy on an epic scale. It’s hard to imagine that this is the result of one man’s passionate pursuit of excellence, but Paul G. Allen was indeed a visionary, and he was drawn to artists who shared his genius for seeing our world in new ways and explaining it to us by new means. Christie’s is honored to be able to make this historic sale come to life and share it with the world.”

From co-founding Microsoft in 1975 to starting his first charitable foundation in 1986, from creating the acclaimed Museum of Pop Culture (MoPOP) in 2000 to launching the Allen Institute in 2003 with its game-changing scientific breakthroughs across brain science, cell science, and immunology, Paul G. Allen lived a life motivated by a love of ideas and making the world a better place.

An avid art collector for decades, Allen began publicly sharing pieces from his collection in the late 1990s through dozens of often anonymous loans to museums around the world. In addition, he mounted exhibitions that shared highlights of his collection with the public, including the renowned Seeing Nature exhibit that toured nationally in 2016. It showcased 39 iconic landscape paintings that demonstrated the natural world and highlighted key moments in the development of the landscape genre.

“You have to be doing it because you just love the works… and you know that all these works are going to outlast you,” Allen reflected in an interview for Seeing Nature. “You’re only a temporary custodian of them.”

In 2010, Allen was an early signer of the Giving Pledge, a commitment to contribute the majority of one’s wealth to charitable causes, and in 2015, he was awarded the Carnegie Medal of Philanthropy for dedicating his private wealth to public good. He remarked “…one of my core goals is to accelerate discovery and provide some of the world’s brightest minds with the resources to solve some of the world’s thorniest challenges.”

His philanthropic contributions of more than $2.65 billion during his lifetime deepened our understanding of bioscience, shared art, music, and film with the world, tackled epidemics, helped save endangered species, explored the ocean floor, and invested in more vibrant and resilient communities. Many called Allen a polymath, whose knowledge and skills spanned a wide range of disciplines.

Allen passed away in October 2018, but the breadth and depth of his generosity, and his desire to continue improving the lives of people around the world even after his death, will create impact for generations to come.