Christie’s to Present The Collection of Thomas and Doris Amman 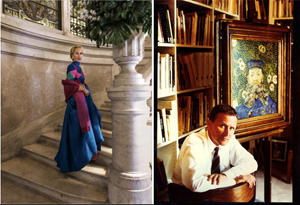 Christie’s will present The Collection of Thomas and Doris Ammann this May in New York City. Works from the collection will be sold across two live sales at Rockefeller Plaza.

Christie’s will present The Collection of Thomas and Doris Ammann this May in New York City. Works from the collection will be sold across two live sales at Rockefeller Plaza during the Spring Marquee Week, beginning with a single-owner evening sale on Monday, May 9, 2022.

With a curated selection of 36 masterworks by leading 20th century artists including Robert Ryman, Francesco Clemente, Sturtevant, and Cy Twombly, the evening sale is led by Andy Warhol’s Shot Sage Blue Marilyn – a painting poised to be the most expensive 20th century work to sell at auction. An additional group of works from the phenomenal private collection will be sold in a dedicated Day sale, taking place during the Spring Marquee Week in succession with the Post-War and Contemporary Day Sale. This sale will showcase a range of 20th century examples of all price points that beautifully illustrate the breadth and depth of the Ammanns’ collecting vision. Highlights include works by Brice Marden, Martin Kippenberger, Mike Bidlo, among others.

This selection of just over 100 works across both sales exemplifies the Ammanns’ superior aesthetic, conveying a myriad of deeply personal stories throughout 20th century art. To maintain clear lines between what they did as dealers and what they did as collectors, as Thomas explained, “you can't collect what you want to sell — because then either you sell all the good things, which is no fun; or you keep all the good things, which bankrupts you.” Thomas and Doris Ammann were devoted friends of the artists they collected, championing them for the entirety of their careers. When asked by Vanity Fair about his friendship with Thomas Ammann, Francesco Clemente refused to speak on it, calling the relationship “too personal, too sacred” for him to discuss publicly. Thomas devoted every free minute of his time to visiting galleries and artists' studios. As he put it in 1988, "What interests me about collecting is seeing what's happening today. I buy young people, and I buy them very early. I don't buy what I hear about, I buy what I see myself.”

The artworks on offer range from early 1960s Pop to Minimalism to the best of the 1980s. Collectively, they are demonstrative of the impactful nature of the gallerist-artist relationship and the important role it has had in the historical narrative of the global art market. The Ammanns were indisputably leaders in the art world and market makers for a generation of talented artists—many of whom have gone on to become household names. A number of works on offer come from the walls of the Ammann landmark home, a Bauhaus masterpiece with breathtaking views of Lake Zurich in addition to their other residences. It is both a curated capsule collection and a cross-generational survey of defining 20th century artistic practices.

Doris and Thomas were siblings and cofounders of Thomas Ammann Fine Art. Throughout their lives, the pair endlessly supported creative practices, shepherding artistic endeavors with singular passion. In 1977, the same year he founded his gallery, Thomas Ammann first envisioned the realization of a comprehensive Andy Warhol catalogue raisonné. Brilliantly coedited by Georg Frei, this was a pursuit Thomas worked toward until the end of his life. It was brought to fruition a decade later in partnership between Thomas Ammann Fine Art and the Andy Warhol Foundation for the Visual Arts. After her brother’s passing in 1993, Doris would continue to run Thomas Ammann Fine Art with grace and humility for the remainder of her life, exerting clear talent in her ability to identify great art.

Georg Frei, Chairman of the Board, Thomas and Doris Ammann Foundation, remarks: “Working with people as wonderful as Doris and Thomas over so many years has been an incredible gift. Transforming their astonishing legacy into charitable work fills me with courage, and gives me hope that together we can create a better world for many, many suffering and underprivileged children.”

Alex Rotter, Christie’s Chairman, 20th and 21st Century Art, remarks: “From Leo Castelli to Ileana Sonnabend, gallerists have historically proven to make the best collectors. Thomas and Doris Ammann demonstrate this flawlessly. The private collection they have assembled is indescribable. To be in the presence of the works is transformative. It will both ground you and ignite a fire inside you. You will simultaneously feel the weight of history and feel the huge importance that this body of artwork still carries today—and will continue to hold for generations to come. The Collection of Thomas and Doris Ammann is truly a testament to the lasting power of 20th century art.”
Marc Porter, Chairman, Christie’s Americas, remarks: “To witness a philanthropic endeavor of this scale is as rare as it is remarkable. During their lives, Thomas and Doris Ammann selflessly gave to a generation of artists—the majority of whom have since been canonized. Today, with the establishment of the Thomas and Doris Ammann Foundation, the siblings continue on in their storied generosity, creating an immediate framework of support for children and their families who need it the most. We could not be prouder to steward the collection of the Ammanns. They leave behind a legacy that will not soon be forgotten.”

A lush large-scale work painted early in the artist’s career, Robert Ryman’s Untitled exemplifies the subtle splendors of surface, light and scale that define his practice. For more than half a century, after he began painting in earnest in the mid-1950s, Ryman worked almost exclusively in white and on supports that were square in format. Within these outwardly restrictive tactics—varying little more than the type of paint he used, its means of application, and the medium and size of the square support—he conjured an endlessly diverse and nuanced body of work.
Andy Warhol’s Flowers is a rare and majestic painting from one of the 20th century’s most iconic bodies of work. This 82 x 82 canvas representing the largest square format within Warhol’s original 1964 series, it is one of just nine Flowers of this scale and crop recorded in the artist’s catalogue raisonné—two reside in the Andy Warhol Museum, Pittsburgh, with a further example held in the Hirshhorn Museum and Sculpture Garden, Washington D. C. The work was one of three of this size selected for Warhol’s historic show at Leo Castelli Gallery in 1964: a landmark, sell-out exhibition that would go on to become synonymous with the heyday of Pop Art.
Exhibition and Tour Dates:
Shot Sage Blue Marilyn will tour to Taipei and Hong Kong and an additional selection of highlights from the collection will tour to Los Angeles before returning to New York, where the full collection will be presented at Christie’s New York, 20 Rockefeller Plaza, ahead of the Marquee Week sales.