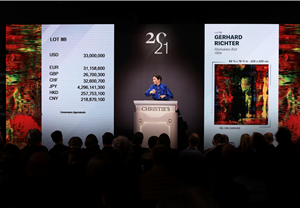 Christie’s Spring Marquee Week continued on Tuesday, May 10, 2022 with the 21st Century Evening Sale achieving a total of $103 Million,

Christie’s Spring Marquee Week continued on Tuesday, May 10, 2022 with the 21st Century Evening Sale achieving a total of $103 Million, adding to the running total of $420 Million for the week so far. The sale was 114% sold above the low estimate, demonstrating a clear demand from collectors globally and growing confidence in the market for emerging contemporary artists.

The auction was led by the monumental canvas by Gerhard Richter, Abstraktes Bild, 1994, selling for $36.5 Million. The sale saw strong depth of bidding, averaging six bidders per lot.

The first lot of the sale, Summertime by Anna Weyant achieved $1.5 Million – more than seven times its low estimate of $200,000 – after eight minutes of competitive bidding. Shara Hughes’s Spins from Swiss also established a new record, achieving $2.94 Million against a low estimate of $500,000. The monumental canvas Green Room by Matthew Wong set a record of $5.34 million, doubling its high estimate. Additionally, Portrait of a Lady (After Louis Leopold Boilly) by Ewa Juszkiewicz sold for a record $1.56 Million (estimate: $200,000-300,000), benefitting POLIN Museum of the History of Polish Jews.

The final lot of the sale was an NFT by Refik Anadol, Living Architecture: Casa Batlló. The digital artwork utilizes the building’s iconic façade and local climate data to create an ever-changing web of color and serpentine forms. The work has been on view in Rockefeller Plaza and achieved $1.38 Million.

Ana Maria Celis, Head of the 21st Century Evening Sale, Christie’s, commented: “Tonight, we were so pleased to see exceptional results by both emerging and established artists—notably fantastic performances by female artists and artists of color. We are seeing a generational shift in the art market toward a new normal that champions diversity and inclusion. Of the ten artist records set, six of them were by women and artists of color. This truly represents the new shape the art market will take in the 21st Century and beyond.”