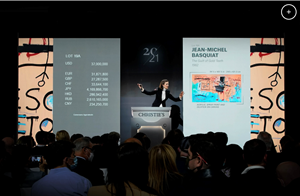 On November 9, Christie’s welcomed back collectors from around the world for the first time in-person to its Rockefeller Center saleroom, redesigned to present a fully hybrid and immersive global auction experience.

On November 9, Christie’s welcomed back collectors from around the world for the first time in-person to its Rockefeller Center saleroom, redesigned to present a fully hybrid and immersive global auction experience. Christie’s 21st Century Evening Sale, launching Christie’s 20/21 Marquee Week of sales in New York was 100% sold, achieving a total of USD $219,278,750, and 114% hammer above low estimate, demonstrating strong demand from collectors and confidence in the market on par with pre-pandemic levels. The auction was led by the monumental canvas by Jean-Michel Basquiat, The Guilt of Gold Teeth, 1982, achieving USD $40,000,000. The sale attracted participation from bidders in 27 countries, with 58% of lots selling above the high estimate.

HUMAN ONE, the first hybrid physical and digital artwork by record-shattering NFT artist Beeple—his much anticipated follow-up to EVERYDAYS: The First 5000 Days– achieved $28,985,000, selling online to a bidder based in Switzerland, underscoring the power of NFTs to break into masterpiece pricing. Across the two weeks of the pre-sale exhibition, more than 1,600 visitors came into the galleries, and the artist made a personal appearance at Christie’s to engage with visitors and talk about his work. Another notable result was seen by Peter Doig’s Swamped, selling for $39,862,500 and setting a new auction record for the artist.

The first 13 lots from IMAGE WORLD: Property from a Private American Collection, inspired by the 1989 Whitney Museum of American Art exhibition on the Picture Generation, “Image World: Art and Media Culture,” sold tonight for $36.5 million. Twenty-eight more lots from the group will be sold in the Post-War and Contemporary Art Day Sale on Friday, November 12, with additional lots from the group being sold in subsequent sales.

Ana Maria Celis, Head of the 21st Century Evening Sale, Christie’s, commented: “Tonight, we were pleased to welcome live bidding back to Christie’s and we were thrilled to see the sale 100% sold, with ten auction records. We’re so proud that our innovative 20/21 sales format continues to provide a vital platform to showcase on a global stage the work of new and even more diverse artists including women and artists of color, which is what the market demands. We also saw a wonderful amount of excitement around three lots generously donated by the artists to support important philanthropic initiatives: New York City AIDS Memorial and ClientEarth. It was truly a phenomenal night.”

Christie’s was honored to offer three works in the 21st Century Evening Sale to support important charitable causes. Works from Unquestioning Love: Artwork Sold to Benefit the New York City AIDS Memorial included Landscape by Nicolas Party achieving $3,270,000 a new record for the artist at auction and Dana Schutz’s Smokers, which sold for $1,830,000. Sixteen additional works will also be offered on Friday, November 12 in the Post-War and Contemporary Art Day Sale to benefit the NYC AIDS Memorial. Rashid Johnson’s Bruise Painting “Or Down You Fall” was sold after nearly five minutes of competitive bidding to a phone bidder for $2,550,000 to benefit the environmental charity ClientEarth. The sale of this lot was a continuation of Christie’s collaborative series in partnership with Gallery Climate Coalition to raise funds in the arts sector to tackle issues surrounding climate change, and simultaneously established a new record for the artist at auction. Following the sale of Cecily Brown’s There Will Be Bluebirds in London last month, this philanthropic initiative will continue with the sale of a work by Xie Nanxing on December 1 in Hong Kong.