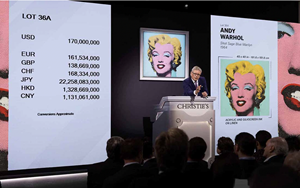 On 9 May, Christie’s 20th/21st Century sale week in New York commenced with The Collection of Thomas and Doris Ammann Evening Sale. The sale concluded with auctioneer Jussi Pylkkänen, Christie’s Global President, hammering down Andy Warhol's Shot Sage Blue Marilyn for a record $195,040,000, making it the most expensive 20th-century artwork ever sold at auction. The first sale of the week totalled $317,806,490, selling 94 per cent by lot and 98 per cent by value.

The 21st Century Evening Sale took place the following evening, Tuesday 10 May. Led by auctioneer Georgina Hilton, Head of Classic Art, Asia Pacific, the sale totalled $103,064,200, selling 100 per by lot and 114 per cent above the low estimate.

Thursday evening opened with a white glove sale hammered in by auctioneer and Co-Chairman of the Impressionist and Modern Art department, Adrien Meyer. The Collection of Anne H. Bass totalled $363,087,500, selling 129 per cent above the low estimate. The 20th Century Evening Sale immediately followed, realising an impressive $468,174,000, selling 119 per cent above the low estimate and 98 per cent by lot. The last lot of the night marked the debut of the iconic Raptor at auction: the most complete Deinonychus skeleton ever found sold for $12,412,500.

The week witnessed exceptional results for collections, beginning with The Collection of Thomas and Doris Ammann Evening Sale that totalled $317,806,490 with 94% sold by lot, 68% of lots selling above their high estimates and Andy Warhol’s Shot Sage Blue Marilyn emerging as the most expensive 20th century artwork to sell at auction. The Day Sale raised an additional $7.3 million for The Thomas and Doris Ammann Foundation, bringing the week’s cumulative total to $325.1 million for the Foundation and establishing The Ammann Collection as the second-largest philanthropic auction

As the most significant American collection to come to market this season, The Collection of Anne H. Bass set the bar with a white-glove sale of 12 lots that totalled $363,087,500, 149% sold above the low estimate and with the top lot, Claude Monet’s Parlement, soleil couchant, achieving $75.9 million

Surrealism shined on Saturday, 14 May with The Surrealist World of Rosalind Gersten Jacobs & Melvin Jacobs achieving $42.3 million, selling 92% by lot with spirited participation from 16 countries. The top lot was Man Ray’s iconic masterpiece Le Violon d’Ingres, setting a record for a photograph by selling to a bidder on the phone for $12.4 million. The online component of The Jacobs Collection closed on 19 May to realise $417,060 over 83 lots

The 21st Century Evening Sale achieved $103 million with 114% sold above the low estimate, averaged six bidders per lot and set 10 artist records, six of which were works by women and artists of colour. Gerhard Richter’s Abstraktes Bild led the sale at $36.5 million and the first lot of the sale, Summertime by Anna Weyant, achieved $1.5 Million — more than seven times its low estimate — after eight minutes of competitive bidding

The 20th Century Evening Sale continued with 98% sold by lot and 99% by value with Ernie Barnes stratospherically breaking into his first evening sale with The Sugar Shack, setting an artist record at $15.2 million — 76 times its high estimate — after more than 10 minutes of competitive bidding from 22 parties. 13 works reached more than $10 million, including Emanuel Leutze’s Washington Crossing the Delaware and the top lot Jackson Pollock’s Number 31

The Raptor — the most complete Deinonychus skeleton ever discovered — concluded the night by realising $12.4 million, doubling its low estimate

The Post-War and Contemporary Art Day Sale totalled $97 million, realising 93% by lot, 151% hammer above the low estimate with 17 works selling for more than $1 million

Picasso Ceramics Online rounded out the series with 100% sold by lot to achieve $2.2 million.