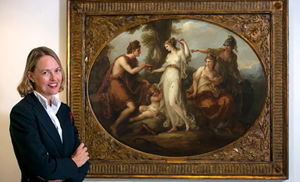 The President of the Board of Trustees of the Museo de Arte de Ponce, María Luisa Ferré Rangel, announced today the appointment of Cheryl Hartup as Director of the prestigious cultural institution.

The President of the Board of Trustees of the Museo de Arte de Ponce, María Luisa Ferré Rangel, announced the appointment of Cheryl Hartup as Director of the prestigious cultural institution.

Hartup, who will lead the Museo de Arte de Ponce as of November 1, has an extensive professional background with over 30 years dedicated to art museums and their communities. Prior to her appointment, she served as curator of academic programs and Latin American and Caribbean art at the Jordan Schnitzer Museum of Art at the University of Oregon.

The new Director has strong ties to the Museo de Arte de Ponce where she was the chief curator from 2005 to 2012. Among her accomplishments during her tenure at the institution, was the formalization of alliances and exchanges with the Museo Nacional del Prado in Madrid, Tate Britain in London, and the Belvedere in Vienna. Under her leadership of the curatorial department, the Museum added over 700 acquisitions to the artistic patrimony of the institution. In addition, Hartup actively participated in the renovation and expansion project of Museo de Arte de Ponce that culminated in its reopening in 2010. Furthermore, she is recognized in the Puerto Rican artistic and cultural community for her work with other renowned cultural institutions on the island.

The new Director expressed her enthusiasm to return to the Museo de Arte de Ponce and her appreciation to the Board of Trustees. “I’m thrilled to return to what was my passion and an honor to serve for many years; to reunite with former colleagues with whom I worked collectively on important projects for the institution and to meet others whose work is equally laudable. Together we will continue to serve our communities, dedicating special attention to disadvantaged populations. We will build new partnerships with local and international institutions to extend the reach and impact of the Museum’s collection. At the same time, we will work incessantly on the reconstruction of the art galleries with the objective of reopening them for the enjoyment of all”, reiterated Cheryl Hartup adding that the institution will shortly announce a comprehensive plan centered on the renovation of its facilities after the damages caused by the impact of the earthquakes in January, 2020.

“The Board of Trustees of the Museo de Arte de Ponce and its employees welcome Cheryl Hartup as Director of the institution. We are certain that her vast professional experience, the years in which she was an integral part of our management team and her dedication to the cultural development of our Island will be of great value in this stage in which we will begin the reconstruction of our galleries, as we strengthen the Museum’s role as an important space of cultural and artistic interaction for Puerto Rico and the world”, indicated Ferré Rangel.