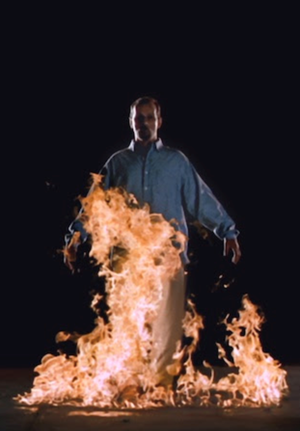 The exhibition Double Act brings together two collections: the monumental video installations from the internationally renowned art collection of the American Kramlich family on the one hand, with highlights from our own collection of 17th-century paintings on the other.

The exhibition Double Act brings together two collections: the monumental video installations from the internationally renowned art collection of the American Kramlich family on the one hand, with highlights from our own collection of 17th-century paintings on the other. Contemporary greats like Bill Viola, Marina Abramović, Richard Mosse, Bruce Nauman and Steve McQueen rub shoulders with works by old masters such as Hendrick Golzius, Roeland Saverij, Paulus and Johannes Moreelse, and the Utrecht Caravaggisti painters Dirck van Baburen, Hendrick ter Brugghen and Gerard van Honthorst. The works mirror each other and show striking similarities, sometimes in terms of subject, sometimes in terms of mood. In some cases the resonance between painting and installation is immediately obvious, and at times it is more intuitive. It is the first time for the Kramlich collection to be displayed outside the United States on this scale.

By bringing together two such seemingly different collections the similarities stand out. When we look beyond the medium of paint or video, we see that both the 17th-century paintings and video art feature the vivid effects of light and dark and an emphatic delineation of the image. What the works on display have in common, above all, is their poignant character. They depict emotions, each using the techniques and technical resources of their time. The art of painting and video art meet in Double Act, and together they reflect human moods and emotions – like mirrors for the soul. The works on display also relate to recurrent and contemporary issues such as emancipation, colonialism, imperialism and war. Double Act is a tribute to the power of imagination.

The juxtaposition of the old, static art of painting with the dynamic video installations enhances the impact on the visitor’s experience. Marina Abramović’s work Art must be beautiful, Artist must be beautiful (1975) is a good example: it shows the artist brushing her hair until it clearly hurts, while endlessly repeating the sentence given in the title. This video is projected alongside 17th-century paintings by Van Honthorst and Van Bronckhorst depicting voluptuous women looking mischievous. It is exactly this male gaze that Abramović objects to, so that the sentence ‘Art must be beautiful, Artist must be beautiful’ is charged with new meaning. Both works are about looking and being looked at, and reinforce each other in surprising ways.

Richard Mosse’s monumental video installation The Enclave (2013) is paired with Hendrik ter Brugghen’s painting Mars asleep. The installation comprises six projections showing the constant threat and harrowing conditions of a war that drags on forever; images that are painfully relevant at the present time. The poignancy of Mosse’s work is enhanced by the beauty of the images. Using a 16mm infra-red camera, the often waiting soldiers appear to inhabit a dreamy pink landscape. The ‘real action’ always seems to take place off-camera.

The painting Mars Asleep depicts the god of war in the guise of a sleeping soldier, and was painted during a period of truce in the Eighty Years’ War with the Spanish. So the god depicted here is resting in peace, and as such symbolises the temporary absence of war. But for how long? As a precaution, his hand continues to clutch his sword. As viewers, we are left to reflect on what it means to be under threat and how we should respond.

The exhibition includes works by leading contemporary artists such as Bruce Nauman (Raw Material – Ok, Ok, Ok, 1990), Bill Viola (The Crossing, 1996) and Steve McQueen (Just above my head, 1996 and Lynching Tree, 2013). Among the top pieces from Centraal Museum’s own collection is the installation Expecting (2001 – 2004) by Pipilotti Rist, and there are two 17th-century paintings by  Hendrick ter Brugghen from the Rijksmuseum collection.

Collaboration with ILFU
Centraal Museum has teamed up with the International Literature Festival Utrecht (ILFU). Together we have commissioned a number of writers to write about the combinations presented in Double Act. The names of these writers are due to be announced at a later date.

The Kramlich collection
Comprising more than 150 film, video and media installations from the 1960s to today, the Kramlich collection is considered to be one of the world’s best and biggest private collections of media art. The collection is mainly guided by an interest in works that reflect on contemporary aesthetic, ethical and societal issues, and contains works by artists from North American, European and Asian countries.

Art collectors Richard and Pamela Kramlich are closely involved with the collections of, among others, the MOMA in New York and San Francisco and Tate in London. Over the past twenty years, they have also supported research into the most effective methods of preserving, displaying and storing multimedia art,  particularly through the Matters in Media Art project. This is the first time for the Kramlich collection to be exhibited outside the United States on this scale.