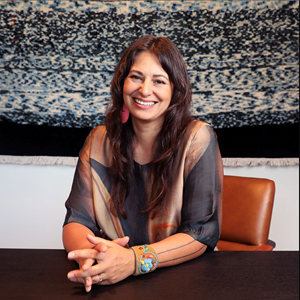 ICI will honor curator Candice Hopkins and the nonprofit organization American Indian Community House (AICH) with the 2022 Leo Award. Presented as part of ICI’s 2022 Benefit in a Box, the award recognizes Hopkins’s work in changing perspectives across the curatorial field, opening doors for artists and curators through projects such as ICI’s traveling exhibition Soundings: An Exhibition in Five Parts and in her role as Executive Director and Chief Curator of Forge Project. Hopkins shares the Leo Award with AICH, whose mission is to improve and promote the well-being of the Native American community and to foster intercultural understanding, aligning with ICI’s commitment to the support of Indigenous practices. Both will be honored on October 25 at a reception at Sean Kelly Gallery in New York. The 2022 Benefit is co-chaired by Becky and David Gochman, Lauren Kelly, Suydam (Sydie) Lansing, and Ann Schaffer.

“All of us at ICI are so deeply grateful to Candice for the opportunity to work with her, and we are proud to recognize her alongside the American Indian Community House—and so many people who have accompanied them along the way—for their tireless work to promote Native American contemporary art,” says Renaud Proch, Executive & Artistic Director, ICI. “This year’s honorees represent the potential of curatorial work to make history every day; to create spaces for artists who open our eyes to a complex understanding of the world; and to put people in relationship to one another, strengthening communities through art.”

In her work with ICI, Hopkins co-curated the exhibition Soundings: An Exhibition in Five Parts, with Dylan Robinson, which has traveled to seven venues in North America since 2019 and recently opened at the Kansas City Art Institute. This exhibition represented a critical step in ICI’s early support of Indigenous curatorial practices, as was Jordan Wilson’s 2020 Indigenous Curatorial Research Fellowship, which was conducted under the advisement and mentorship of Hopkins.

A citizen of Carcross/Tagish First Nation, Candice Hopkins has been widely recognized for bringing Indigenous art and ideas to the foreground. The 2013 exhibition Sakahàn: International Indigenous Art at the National Gallery of Canada and in 16 partner institutions, which she co-curated with Greg Hill and Christine Lalonde, was the largest-ever global survey of contemporary Indigenous art at the time and a major moment in Indigenous curatorial practice. She was Senior Curator for the 2019 and 2022 editions of the Toronto Biennial of Art. In 2021, she was named the inaugural Executive Director and Chief Curator of Forge Project, a Native-led initiative centered on Indigenous art, decolonial education, and supporting leaders in culture, food security, and land justice based in the Mahicannituck valley on the unceded homelands of the Muh-he-con-ne-ok, the Peoples of the Waters That are Never Still, who now reside in Wisconsin and are known as the Stockbridge Munsee Band of Mohicans. Last year, Hopkins was one of the inaugural recipients of the Noah Davis Prize celebrating curators who are innovating in their field and broadening cultural audiences.

Founded in 1969, American Indian Community House is a New York institution that has provided critical community support for the 35,000 Native Americans representing 70 aboriginal nations living in New York City as one of many urban diasporas. Among the many social services they provide, AICH has sought to raise awareness of the impact of HIV/AIDS on Native communities and to help bridge access gaps in healthcare including PReP and elder care. The organization has also partnered with numerous arts organizations to provide art programs and advocacy in New York, promoting a broader understanding of American Indian history and culture. Over its more than fifty-year history, AICH has made a significant impact on the lives of many Native people, including Hopkins, who as a graduate student at Bard College experienced the work of artists Greg Hill and Mario Martinez in seminal exhibitions at the AICH Gallery.

About Candice Hopkins
Candice Hopkins is a citizen of Carcross/Tagish First Nation and lives in Red Hook, New York. Her writing and curatorial
practice explore the intersections of history, contemporary art, and Indigeneity. She is Exjecutive Director of Forge Project, Taghkanic, NY, and Senior Curator for the 2019 and 2022 editions of the Toronto Biennial of Art. She was part of the curatorial team for the Canadian Pavilion at the fifty-eighth Venice Biennale, featuring the work of the media art collective Isuma; and co-curator of notable exhibitions including the national traveling survey Art for New Understanding: Native Voices, 1950s to Now; SITElines.2018: Casa Tomada, SITE Santa Fe; documenta 14, Athens and Kassel; and Sakahàn: International Indigenous Art, National Gallery of Canada, Ottawa. Notable essays include “The Gilded Gaze: Wealth and Economies on the Colonial Frontier,” in the documenta 14 Reader; “Outlawed Social Life,” in South as a State of Mind; and “The Appropriation Debates (or The Gallows of History),” in Saturation: Race, Art, and the Circulation of Value (New Museum/MIT Press, 2020).