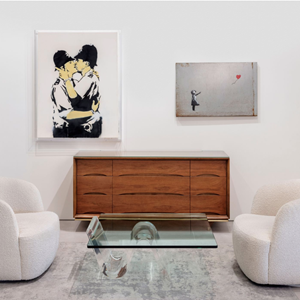 “We believe these are three of Banksy’s best works,” says Hugo Cobb, head of Sotheby’s “The Now,” a sales format introduced in November in New York to showcase works of this century. “Apart from being works from the collection of Robbie Williams, they are a fantastic, very high-value consignment that we think is a sort of a perfect thing to take this new auction that we’re doing forward.”

Williams, whose hit songs include Angels, Millenium, and Tripping, bought the works shortly after they were created directly from Banksy’s studio. “It’s quite exciting that of all of all the things that a pop star wanted to buy at that time, this is what was coolest,” Cobb says.

The singer, a big collector of contemporary art, didn’t reveal why he was selling the Banksy works at this time, although art pieces by the notoriously anonymous artist have steadily been rising in price in recent years.

One of the most notable of these sales involved another image of Girl with Balloon, this one created with spray paint and acrylic on canvas mounted on board. The painting, which sold for £1.1 million, was shredded by a hidden mechanism inside its frame as the hammer fell during a live Sotheby’s auction in October 2018 in London. Retitled Love is in the Bin, the shredded painting went up for auction again at Sotheby’s London this past October, selling for £18.6 million.

The work Williams bought is relatively large scale for a Girl with Balloon image. It was rendered on a reclaimed stainless-steel shelf and is from an edition of only five compared with editions of 25 for the image on canvas and 150 for works on paper, Cobb says. “It’s quite raw, it’s got rust on it,” he says. “It definitely speaks to [Banksy’s] background as an artist.”

The Kissing Coppers image first appeared on the back of The Prince Albert Pub in Brighton, on England’s southern coast. The Williams’ work up for sale is a unique canvas, and the first to include this motif at auction, he says. Sotheby’s has handled a number of Banksy works in recent years, including Devolved Parliament, 2009, (which sold for £9.9 million). But, Cobb says, “never for us has a painting been so closely linked to one of the street pieces.”

Personally, he adds, “there’s something sort of funny and provocative about [Kissing Coppers] that chimes quite nicely with Robbie’s public image within British culture.”

Vandalised Oil (Choppers) is one in a series of found oil paintings that Banksy changes slightly in some absurd way. The artist also has a series of "corrupted oil" paintings of well-known works such as Show me the Monet, 2005, a tongue-in-cheek take on Claude Monet’s painting of a Japanese footbridge over a pond filled with water lilies at his home in Giverny, France. Sotheby’s sold that work for £7.6 million in October 2020.

Works in this series are nice to have inside Sotheby’s galleries because Banksy painted them to hang unnoticed in any museum or traditional art collection “until someone looks at them closely and does a double take,” Cobb says.