Bozar Director, Sophie Lauwers Has Passed Away at Age 55 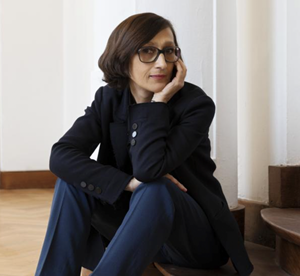 Bozar has lost an experienced leader and an inspiring colleague. On Sunday May 29, Sophie passed away at home from an illness she had been living with for many years, but which had struck mercilessly in recent weeks.

On Sunday 29 May, Sophie passed away at home from an illness she had been living with for many years, but which had struck mercilessly in recent weeks. Bozar has lost an experienced leader and an inspiring colleague. Sophie continued to work for our house until the very end. We will remember her refined personality, and as someone who lived life with passion and great humour. She drew strength from beauty and art, a strength she radiated with a smile.

For 20 years, Sophie dedicated herself with all her heart to Bozar. First as Exhibition Coordinator, then from 2011 as Head of the Exhibition Department, and these last months as Director General. From the start, Sophie sought out cross-connections between classical and contemporary art, and between the visual arts and other artistic disciplines. As Exhibitions Director, she pursued a three-track policy of the great classical arts, key figures from modern art after the two world wars, and Belgian and international contemporary artists. Sophie also revived the tradition of the ‘Antichambres’, recent works by artists presented in a distinctive spatial constellation. The successful exhibitions of Michaël Borremans, Keith Haring and David Hockney are largely to her credit. She alternated big names with less well-known artists, such as Jacqueline Mesmaeker, and felt it was self-evident that female artists should receive equal attention.

Sophie’s vision of her mandate as Director General was one of teamwork, a journey between what is already known and what is left to explore. Connection, generosity, and the power of the artist’s imagination stood at the centre of that vision. An extract from her application letter reads as follows: “The Centre for Fine Arts in Brussels is the institution that transformed me. It taught me to deal with complexity, to anchor beliefs in a constantly changing world, and to remain efficient in changing circumstances by increasing my adaptability. I have continued to grow and learn, taking risks and formulating proposals. I also learned to move forward collectively and to see the importance of nuance in a world where consensus cannot be taken for granted and where diversity is a strength, despite all the friction it can sometimes cause.”

From 10 to 28 June, the Centre for Fine Arts will open a public condolence book, created by Valérie Mannaerts in an arrangement by Richard Venlet and Ekaterina Kaplunova. Everyone is welcome to write a word of farewell, every day between 10am and 6pm. Sophie’s family does not wish to receive condolences directly. Personal messages for the family can be sent to: Bozar/Sophie Lauwers – Rue Ravenstein 23 – 1000 Brussels.

The continuity of our daily operations is ensured. The day-to-day management continues under the leadership of the Executive Committee and the Board of Directors.

The Board of Directors, Executive Committee, and entire staff of Bozar are deeply affected by this loss. Our thoughts are with Sophie’s husband, children, family, and friends.