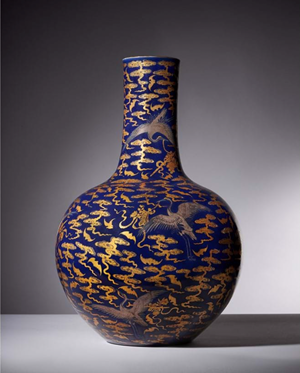 Dreweatts will be presenting an exceptionally rare Chinese vase created in the 18th century for the court of the Qianlong Emperor, which will be offered on Wednesday 18 May in their auction of Chinese Ceramics and Works of Art.

Dreweatts will be presenting an exceptionally rare Chinese vase created in the 18th century for the court of the Qianlong Emperor, which will be offered on Wednesday 18 May in their auction of Chinese Ceramics and Works of Art. It was purchased by a surgeon in the 1980s for a few hundred pounds and passed from the original owner to his son, who also, not realising its true value positioned it in his kitchen. It was only when a visiting antiques specialist spotted it, that its true value and history was revealed.

The vase is a magnificent example of Imperial Qianlong porcelain. The name of this shape of vase in Chinese is tianqiuping, 'heavenly globe vase', as in Chinese iconography heaven is a sphere. Hence, the large globular body of such vases provides an ideal reference to heaven.

It is remarkable for its highly unusual enamelling techniques with a striking and exceptionally rare palette of gold and silver against a vivid blue ground, which gives the vase a brilliance of tone. The rich cobalt blue seen on the current vase is sometimes referred to as 'sacrificial blue'. This name derives from the use of vessels bearing this colour glaze during sacrifices at the Imperial Altar of Heaven. It is extremely unusual to see blue vases painted in both gilding and slightly raised silver. The rarity of painted silver on porcelains suggests that the medium may have been difficult to control. An example of a moon flask with similar technique is on display at the Shanghai Museum.

This vase is a testament to the creativity of craftsmen working during the Qianlong period in exploring and perfecting enamelling techniques to cater to the emperor's taste for the innovative and the exotic while remaining rooted in antiquity.Such a vase would require at least three firings in the kiln for the three different glazes and enamels. First at over 1200℃ for the cobalt blue, then at a lower temperature for the turquoise green on the interior of the vase, finally the gold and silver enamels in a special kiln designed for enamels.

T'ang Ying succeeded Nien His-yao as Commissioner at Huai An and Superintendent of the Imperial Factories in 1736. He is recorded as overseeing the making of enamelled silver (mio yin), see Soame Jenyns, Later Chinese porcelain, p. 64. The author further states, 'One of the most remarkable features of the ceramics of the Qianlong period was the virtuosity of their copies of other materials, which includes 'gold' and 'enamelled silver', p.67.

However, no other tainquiping decorated with the same subject in gold and silver appears to have been published. The exceptional quality, monumental size, and imposing presence of the current tianqiuping, as well as its fine and auspicious decoration, would have rendered it suitable for prominent display in one of the halls of the Qing palace. As a devout Buddhist, the Qianlong Emperor was also a follower of Daoism with the wish for long life. We can see the silver cranes holding an emblem for each of the eight immortals associated with Daoism - including a flower basket, a flute, a fan and castanets - on the vase's body. The flying cranes and bat also carry auspicious messages for longevity and prosperity. Compare with a Famille Rose tianqiuping vase with a similar design, in the Santa Barbara Museum of Art, object number 1989.49 and another Famille Rose tianqiuping, with flying bats amidst clouds, from the court collection at the Palace Museum, museums accession number gu00154670. A moon flask with the combined silver and gold decoration was sold at Sotheby's Paris 23rd June 2016, lot 100.