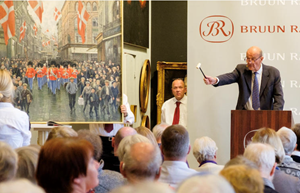 Bonhams, the global auction house, has acquired the Danish auctioneers Bruun Rasmussen, the leading auction house in Denmark. Financial terms are not being disclosed.

Bonhams, the global auction house, has acquired the Danish auctioneers Bruun Rasmussen, the leading auction house in Denmark. Financial terms are not being disclosed.

Bruun Rasmussen was established in Copenhagen in 1948 by Arne Bruun Rasmussen, whose son Jesper has chaired the company since 1985. Jesper Bruun Rasmussen will continue as Chairman Emeritus, while the company will continue to be run by Jakob Dupont, the CEO. The company, with its headquarters in Copenhagen's Nordhavn district, is a leading traditional auction house in Scandinavia, and a digital pioneer. It conducts live auctions at its original salerooms in the city's centre, as well as online. Bruun Rasmussen sells more than 75,000 lots each year across a wide range of categories from furniture, paintings and modern design to silver, wine, and collector's items such as books, arms and armour, stamps and coins. The company is the subject of a documentary series, Auktionshuset, which has been running on Danish television since 2013.

Founded in London in 1793, Bonhams, one of the world's leading auctioneers of fine art and collectables, motor cars and jewellery, was acquired by the UK-based private equity firm, Epiris, in September 2018. Since then, substantial investment has been made in the business, specifically in digital, marketing and new hires. Bonhams operates globally from flagship salerooms in London, New York, Los Angeles, Paris, and Hong Kong, with additional sales in Edinburgh and Sydney. Through its acquisition of Bukowskis in Stockholm in January 2022 and Skinner in Boston, US, in March 2022, Bonhams also has a presence in these regions. This year Bonhams will hold more than 400 specialist sales across 53 different categories.

Bruno Vinciguerra, CEO of Bonhams, said: "Bruun Rasmussen is one of the great European auction houses. A brand revered in Denmark, it is known and loved for its pioneering sales, particularly in Scandinavian art and design. Following on from Bonhams' acquisition of the Swedish auction house Bukowskis in January, our strategy is to bring a thriving regional business to the global marketplace through Bonhams' international network. The addition of Bruun Rasmussen will enhance Bonhams' European scale and increase digital capabilities to support further outreach across the Bonhams network. We are delighted to welcome Bruun Rasmussen to our growing family."

Jesper Bruun Rasmussen, Bruun Rasmussen's Chairman, said: "I have just brought down the hammer on the largest and most important sale in the history of Bruun Ramussen Auctioneers. It has been a privilege to have led this great auction house for so many years. I look forward to becoming a part of the journey going towards even bigger horizons, together with my children Alexa and Frederik. I am very proud of the fact our company will become a worldwide player through Bonhams. It is a great pleasure to announce the new name: Bruun Rasmussen Auctioneers – Part of the Bonhams Network".

Jakob Dupont, Chief Executive of Bruun Rasmussen, said: "This move creates many new opportunities for the future development of the company. With the consolidation of two very strong brands, Bruun Rasmussen will gain access to a larger network of clients and specialists all over the world and become an important player on the global auction scene. Together we also stand stronger in the digital transition of the auction market."

Hans-Kristian Hoejsgaard, Chairman of Bonhams, said: "I have long admired Bruun Rasmussen. It is an institution that's woven into the hearts of the Danish nation, so as a proud Dane, this acquisition gives me particular personal pleasure. It shows further confirmation of our determination to become the world's local auction house."