Barbara Hepworth’s Sculpture in the Rijksmuseum Gardens this Summer 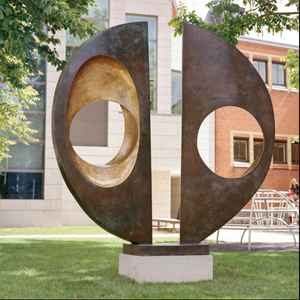 This summer the sculptures of the major British artist Barbara Hepworth (1903–1975) will grace the open gardens of the Rijksmuseum. It is her first solo exhibition in Amsterdam.

This summer the sculptures of the major British artist Barbara Hepworth (1903–1975) will grace the open gardens of the Rijksmuseum. It is her first solo exhibition in Amsterdam. The nine works show the artist at the peak of her powers. Most of the sculptures come from English public gardens and parks, and are rarely moved from their permanent location. Hepworth’s geometric Construction (Crucifixion) from the cloister garden of Salisbury Cathedral references the visual idiom of Hepworth’s friend Piet Mondrian, and thereby also her special relationship with the Netherlands. 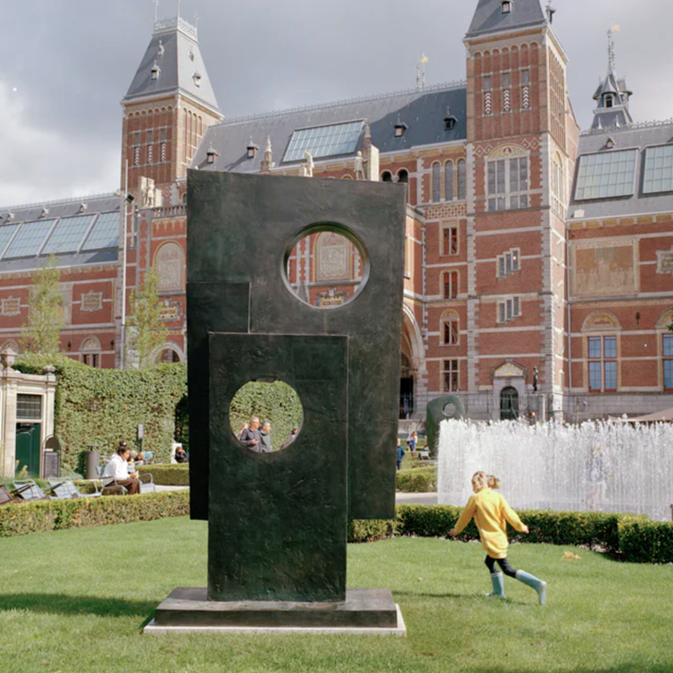 Barbara Hepworth in the Rijksmuseum Gardens presents an overview of the artist’s monumental later works from the 1960s and early 1970s. These include Monolith (Empyrean), the exhibition’s earliest work – which Hepworth made in 1953-1954 and usually stands in the gardens of Kenwood House (Hampstead Heath) – and the figures from the 1970 The Family of Man group, which comes from Britten Pears Arts, the cultural centre in Snape Maltings (Suffolk). The exhibition also includes work from private collections such as Hepworth’s last major multi-part sculpture Conversation with Magic Stones (1973). The Kröller-Müller Museum in the Netherlands is lending the 1963 work Squares with Two Circles for the exhibition.

Barbara Hepworth is one of the sculptural pioneers of modernism, an early 20th century movement that broke with traditions and introduced innovative forms of expression. Hepworth was only in her 20s when she started attracting attention for her modern sculptures in wood, stone and marble. The piercing of holes in stone blocks became a characteristic trope in the artist’s work. She was one of the few female artists of her generation to enjoy international success, and she became a role model for younger generations. She also adopted an emancipatory stance through her insistence on being addressed as a sculptor rather than a sculptress. The current attention on her life and work is very much in line with the ongoing demand for a more balanced representation of male and female artists.

LINKS WITH THE NETHERLANDS

In 1938, Barbara Hepworth and her second husband Ben Nicholson helped the Dutch painter Piet Mondrian move from Paris to London to escape the Nazi advance. Their friendship had a part to play in Hepworth’s stylistic reference to Mondrian in her 1966 work  Construction (Crucifixion). In an exceptional gesture, Salisbury Cathedral has loaned this remarkable work to the Rijksmuseum. Hepworth debuted in the Netherlands in 1938 through her inclusion in the exhibition Abstracte Kunst (Abstract art) at Amsterdam’s Stedelijk Museum. Since the 1950s and 1960s some Dutch museums have purchased her work for their collections. In 1965 the Kröller-Müller Museum – which contains one of the most important groups of sculpture by the artist in public ownership in the world - mounted the then-largest retrospective in Europe of Hepworth’s work. Barbara Hepworth in the Rijksmuseum Gardens’ is her first solo exhibition in Amsterdam. 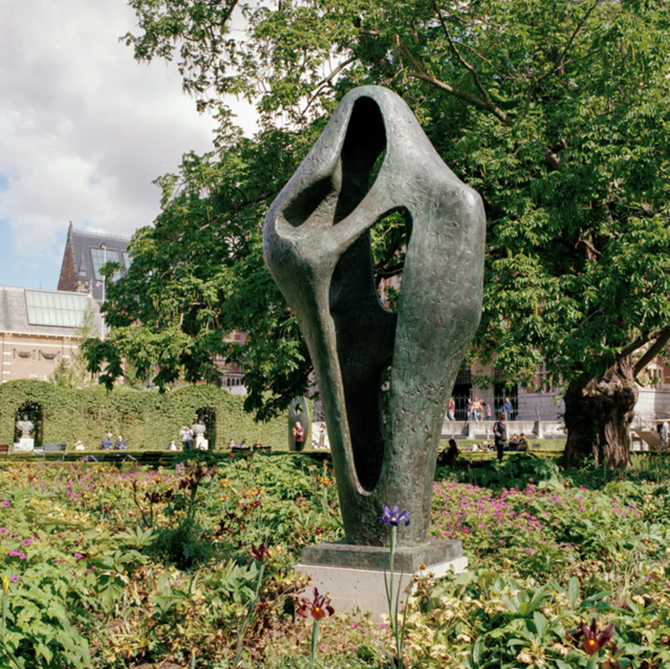 Hepworth’s fame grew internationally in the post-war years, and she became a prominent figure in the modernist artistic colony based in St Ives. Her international reputation was confirmed when she was awarded the Grand Prix at the São Paulo Art Biennial in 1959; in 1964 her monumental Single Form' was placed in front of the United Nations' headquarter in New York as a memorial to the organisation’s secretary general Dag Hammarskjöld. The smaller version of this work which normally stands in London’s Battersea Park will be on display in the Rijksmuseum Gardens. In 1965, Hepworth was appointed Dame Commander of the Order of the British Empire and as the first female trustee of the Tate Gallery in London.

The exhibition is accompanied by the catalogue Barbara Hepworth in the Rijksmuseum Gardens, which is available in Dutch and English language versions. It includes contributions from Sophie Bowness and Stephen Feeke, an independent curator, writer and PhD Candidate at the Courtauld Institute of Art. Available in Dutch and English, from mid-June from the Rijksmuseum webshop and museum shop, price €15.

Barbara Hepworth in the Rijksmuseum Gardens runs from 3 June to 23 October 2022. This is the ninth edition in an annual series of free outdoor exhibitions at the Rijksmuseum. Previous sculpture exhibitions in the gardens presented the work of Henry Moore (2013), Alexander Calder (2014), Joan Miró (2015), Giuseppe Penone (2016), Jean Dubuffet (2017), Eduardo Chillida (2018), Louise Bourgeois (2019) and Ellsworth Kelly (2021).