Art Treasures from Dutch Museum Have to Go Back to Ukraine 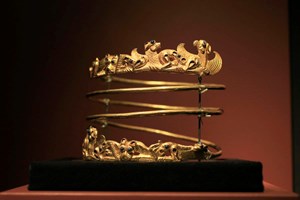 The court in Amsterdam has reassigned the art treasures from Crimea, which were exhibited in 2014 in the Allard Pierson Museum in the capital, to Ukraine in an appeal.

The court in Amsterdam has reassigned the art treasures from Crimea, which were exhibited in 2014 in the Allard Pierson Museum in the capital, to Ukraine in an appeal.

In an earlier lawsuit in 2016, the court ruled that the collection should be returned to Ukraine, but the Crimean museums appealed against this.

After the lost court case, the Russian government warned that it would no longer lend museum pieces to Dutch museums if the Crimean museums lost the case again on appeal. At the time, the Russian Minister of Culture Medinsky said he did not see how exhibitions could still be organized together with the Netherlands. “If you bring a collection from the Hermitage or from the Tretyakov Gallery there, you have to ask yourself if some judge is confiscating these valuables.”