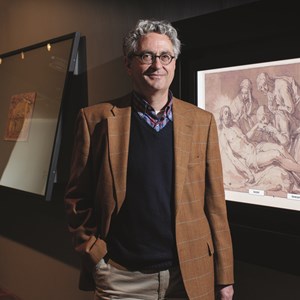 A large drawing by J.A. Knip was recently donated to Museum Boijmans by retiring senior curator, Albert Elen to enrich the collection which has been under his care for the past nineteen years.

A large drawing by artist J.A. Knip was recently acquired for the Dutch museum. Retiring senior curator Albert Elen is donating it to enrich the collection which has been under his care for 19 years.

To celebrate his retirement this month, Albert J. Elen, senior curator for Drawing and Prints at Museum Boijmans Van Beuningen, is donating an impressive drawing by the Dutch artist Josephus Augustus Knip (1777-1847). This large study of trees, made during Knip's stay in Rome (1809-1812), was incorporated into a painting in 1817 that has been in the museum's collection since 1869. The drawing will be displayed together with the painting in the spring of 2022 in a presentation of a selection of acquisitions made by the curator.

Albert Elen is best known for his many years of involvement in the former Koenigs Collection. His book Missing Old Master Drawings from the Franz Koenigs Collection claimed by the State of the Netherlands (1989) led to the discovery in 1992 of 308 drawings that had been hidden in Moscow since 1945 (these have still not been returned) and of 139 drawings concealed in Kiev, which resulted in 2004 in their restitution by Ukraine, their exhibition as Return of a Lost Treasure, and reunification with the core of the Koenigs Collection in Museum Boijmans Van Beuningen.

For the museum, he developed online collection catalogues, such as Netherlandish Drawings of the Fifteenth and Sixteenth Centuries (2012), and organised exhibitions, including Rembrandt in Rotterdam (2006), Bosch to Bloemaert (2014) and Fra Bartolommeo. The Divine Renaissance. These include many drawings from the Koenigs Collection

In the recently opened Depot Boijmans Van Beuningen, gallery areas will mount changing presentations with collection items from the depot compartments, whereby the focus will be largely on aspects of conservation and management. The works on paper, with more than 19,000 drawings and 69,000 prints, form the largest subcollection of the museum. There are representative works by virtually all well-known masters from western art history, such as Dürer, Rembrandt, Boucher, Piranesi, Goya and Daumier. But also, lesser-known artists, such as Knip, are well represented.