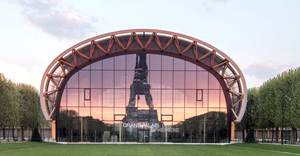 Following its selection in January by the Réunion des musées nationaux – Grand Palais as organizer of a new contemporary and Modern art fair in the iconic Grand Palais of Paris, Art Basel has announced the name, leadership team and Selection Committee for the show.

Following its selection in January by the Réunion des musées nationaux – Grand Palais as organizer of a new contemporary and Modern art fair in the iconic Grand Palais of Paris, Art Basel has announced the name, leadership team and Selection Committee for the show. The name Paris+, par Art Basel celebrates the city’s premier standing as a cultural epicenter and reflects Art Basel’s ambition to create a flagship event that radiates throughout Paris, highlighting the dynamic dialogue between its cultural industries – from fashion and design to film and music.

The new show will be led by a senior leadership team comprising:

Clément Delépine, Director: Delépine is the former Co-Director of Paris Internationale, a fair showcasing young galleries and emerging artists that achieved international acclaim for the audacity and quality of its presentations. Clément Delépine brings with him an in-depth knowledge of the market and an established curatorial practice, having held senior positions at Swiss Institute Contemporary Art in New York, Bortolami in New York, and Galerie Mitterrand in Paris, amongst others.

Virginie Aubert, General Manager: Aubert brings more than 16 years' experience in the art market, having joined Christie’s France in 2004, initially as Business Director leading its 18 Art Departments and from 2015 as General Manager, where she piloted all global transformation projects in France. In 2019, Aubert was appointed Vice President for Christie’s France, leading the company’s business development strategy.

Maxime Hourdequin, Deputy Director: Hourdequin has more than 10 years' experience in the art world and was formerly Deputy Director of FIAC. Maxime first worked at the Musée d'Art Moderne de la Ville de Paris as curator assistant for two exhibitions (Dynasty, Paris, 2010 and Resisting the Present, 2011, Paris/Puebla) and then opened a contemporary art gallery in Paris, before joining FIAC in 2013.

The team based in Paris as part of a newly established French entity will spearhead the fair’s launch and build close relationships with galleries, collectors, artists, museums and institutions in the French capital and beyond. Jennifer Flay, the long-term Director of FIAC (Foire Internationale d'Art Contemporain) will join the team in March 2023 as President of the fair’s Advisory Board.

Clément Delépine, Director, Paris+, par Art Basel, says: ‘Even before my appointment, I welcomed the news of Art Basel’s selection to stage a new fair in Paris. The Art Basel team is committed to the highest standards of excellence, and I am immensely honored and humbled by the trust placed in me. I look forward to collaborating with the entire ecosystem of galleries, institutions, creative and cultural industries here in Paris to create a magnetic event for the city and the world.’

‘We’re excited to have such a strong team at the helm of our new fair in Paris,’ says Marc Spiegler, Global Director, Art Basel. ‘I am confident that with their range of experience and perspectives we will deliver a strong premier edition of our show this fall – that capitalizes both on Paris’s unparalleled legacy as a cultural capital – and on its position as a vibrant crossroads for today’s contemporary culture.’