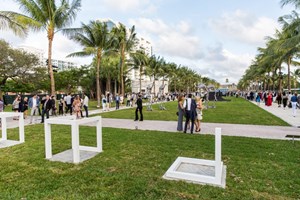 Now in its 16th edition, Art Basel in Miami Beach is the premier art show in the Americas, with more than half of the participating galleries having exhibition spaces in the region. Alongside a robust roster of returning galleries, the 2017 edition of the show features 20 galleries who are participating in the Miami Beach show for the first time.

Now in its 16th edition, Art Basel in Miami Beach is the premier art show in the Americas, with more than half of the participating galleries having exhibition spaces in the region. Alongside a robust roster of returning galleries, the 2017 edition of the show features 20 galleries who are participating in the Miami Beach show for the first time. The show welcomes nine first-time participants from North and South America, including Anat Ebgi from Los Angeles; Chapter NY, David Lewis Gallery and Tyler Rollins Fine Art from New York; Inman Gallery from Houston; Patron from Chicago; Galeria Jaqueline Martins and Ricardo Camargo Galeria from São Paulo; and Isla Flotante from Buenos Aires. Artdependence Magazine talked to fair's representative to find out some more details.

AD: How many galleries from how many countries will participate at this years fair ?

Art Basel's 16th edition in Miami Beach will feature 268 leading international galleries selected for its 2017 Miami Beach show. Drawn from 32 countries across North and South America, Europe, Asia, the Middle East and Africa, the exhibitors will present artworks ranging from Modern masterpieces and historical projects to new works by both established and emerging artists.

There is a geographically diverse spread of galleries participating;

AD: where will this edition differ in the previous ones ?

This year the show welcomes 20 new exhibitors with a strong list of galleries from Asia to the show: Takuro Someya Contemporary Art (Japan), Antenna Space (China), Taro Nasu (Japan). In addition there is a selection of younger New York galleries coming to the show for the first time: David Lewis Gallery (US), Tyler Rollins Fine Art (US), Chapter NY (US) as well as from Houston and Chicago: Inman Gallery (US), Patron (US). Theres a great selection of South American galleries new to the show: Isla Flotante (Argentina), Galeria Jaqueline Martins (Brazil) and Ricardo Camargo Galeria (Brazil).

AD: What special projects will be organized by Art Basel Miami Beach ?

Commencing with this year’s edition, Philipp Kaiser – independent curator and critic – will curate the Public sector of Art Baselin Miami Beach. Situated in Miami Beach’s Collins Park, the Public sector each year presents site-specific sculptures and performances by both established and emerging artists from across the globe. The sector is produced in collaboration with the Bass Museum of Art and supported by MGM Resorts Art & Culture.

AD: What are this years' expectations ?

With over 50% of the galleries participating at this year’s fair, having a footprint in the Americas there will be a greater exposure of Latin American artists and artworks to an international audience. Since 2012, visitor numbers have increased up to last year’s attendance of 77,000.