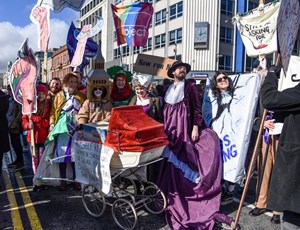 The Turner Prize 2021 has been awarded to Array Collective, it was announced this evening at a ceremony at Coventry Cathedral, in partnership with Tate and Coventry UK City of Culture 2021.

The Turner Prize 2021 has been awarded to Array Collective, it was announced this evening at a ceremony at Coventry Cathedral, in partnership with Tate and Coventry UK City of Culture 2021. The £25,000 prize was presented by Pauline Black, the lead singer of 2 Tone pioneers, The Selecter, during a live broadcast on the BBC. A further £10,000 was awarded to each of the other nominees. This year the Turner Prize exhibition is being held at the Herbert Art Gallery & Museum in Coventry as a highlight of its City of Culture year.

The jury awarded the prize to Array Collective for their hopeful and dynamic artwork which addresses urgent social and political issues affecting Northern Ireland with humour, seriousness and beauty. The jury were impressed with how Belfast-based Array Collective were able to translate their activism and values into the gallery environment, creating a welcoming, immersive and surprising exhibition. The jury commended all five nominees for their socially engaged artworks, and how they work closely and creatively with communities across the breadth of the UK. The collaborative practices highlighted in this year’s shortlist also reflect the solidarity and generosity demonstrated in response to our divided times.

The exhibition is a highlight of Coventry’s UK City of Culture 2021 celebrations. Herbert Art Gallery and Museum champions Coventry’s culture, city and arts and is one of the UK’s leading regional museums. As part of its preparations for City of Culture 2021, the museum underwent a major redevelopment of its gallery spaces in anticipation of the Turner Prize exhibition. In parallel to the Turner Prize exhibition, Coventry also hosts ‘Coventry Biennial 2021: Hyper-Possible’ across Coventry and Warwickshire.

The exhibition of the five shortlisted collectives at The Herbert Art Gallery & Music continues until January 12, 2022. Entry is free.