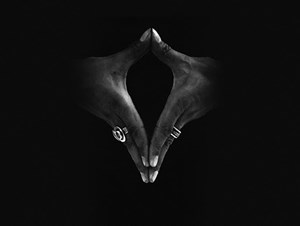 From June 24 - July 25, 2021, Bernaerts Gallery is hosting the exhibition 'Traject' by designer-artist Karim Osmani. The result of seven months of lockdown-living in the Moroccan countryside. A show in which he makes his many guises visible, from actor to designer, and provides the impetus for a new beginning: the storyteller-translator.

Karim Osmani: "Two planned weeks of designing in seclusion turned into seven months. Not in seven days but in seven months I reinvented my world. From 18 March to the end of August, I stayed in a small village on the edge of the Atlas Mountains, in the countryside around Marrakech. Because of the lockdown, everything was closed. Materials were no longer available. I was left with a supply of polyester and plaster, and I collected beautiful stones and rock crystals. I made my own tools, my own moulds. First the preforms in plaster, then polyester for a real mould, then plastering and shaping.  At a certain moment the realisation dawns: I am alone, and I don't know for how long. The scorpions and snakes come closer, and the nearest hospital is far away. In the middle of that survival mode, I decided: we're going to do this big, we're going to go home with something that makes a difference."

"Call it routine, call it discipline. A guidance. Get up at six, spend two hours tending the garden, sowing seeds, growing vegetables. I had chickens. The neighbour had cows. We exchanged eggs for milk. Then I went to work, in a continuous flow. Building, sculpting. Repetition is meditation. The working day ended around six o'clock, then it became pitch dark. It was also very cold, so afterwards the fireplace had to be lit and I had to make sure that there was something to eat. And I talked to myself. In French, we were in Morocco, after all. In the solitude, you suddenly see very clearly what’s in fact important. A connection with nature. Your place in the world. Intellectual honesty. Logic. Passing on knowledge. A strong vision keeps you going. Sometimes a message reached me from here. Whining about not being able to get a haircut. That made me very angry.

"The isolation turned out to be essential. Without the isolation, the shapes, sounds and colours would have been different. Plaster, wood and leather inspired me. The restriction brought greatness. The formal language is natural, inspiration brought back from long walks. Images from the encroaching environment, which takes over your home if you are not careful. The bird that installed its nest on top of my boiler. The roadside cacti, infested by the parasite that eats them until they look like lace. The hexagonal shape of the honeycomb. The pods, leaves and feathers that blew around the house. Sometimes the sculptures grew to two metres. Sometimes they became a piece of jewellery or an accessory. Here in the West there is abundance and you have to keep everything small. Over there, there is nothing, and in the emptiness, lushness grows. Here they say: be normal. There you float on the vastness of your thoughts."

"Trajectory is my life, my past that passes by. You discover the sculptures, hear the theatrical monologues, see the shadows of a past life. It is an ending and a new beginning. I know what I want now. My path is clear: further into Africa. Visit tribes threatened with extinction, learn their crafts and do something with them. With respect. Exchanging. Passing on. Translating.

I have been working in Morocco for thirty years. My mother is Algerian, my father Tunisian and I grew up in a foster family in Antwerp, so strictly speaking, I have nothing to do with that country. But when I came there for the first time, I got the biggest slap in the face I have ever felt. I was at home. The playfulness in human contacts, the slower pace, the time taken to do a task really well... Even the smell of the land was familiar. I fell in love with tadelakt (Berber stucco), studied leather tanning, lost myself in the crafts. Using their traditional techniques, I developed a rigid, Western formal language. Just like I did in Asia. That is where my future lies: learning from others, reusing disappearing techniques, in a way that they are understood here. Call me a translator of forms, a passer-by of forgotten techniques, a born traveller, at home nowhere and everywhere."

"To tease people, to pry them open and take them into a world that does something to them. Immerse them in a feeling of sensuality, transport them to a fairy tale in which they themselves play the leading role. Stimulating their consciousness. Everything is energy. Light and tranquillity unleash the right kind of creativity in everyone. Each object sets something in motion, releases something, can heal you or at least make you feel better. My work is my personal form of feng shui. I am a storyteller. Experience my trajectory. Walk your own path."

Karim Osmani (50) worked as a model for Dries Van Noten and Ann Demeulemeester, was an actor for Niek Kortekaas, designed the interiors for numerous catering establishments such as Villa Doria, Ferrier 30 and Tasso. In Marrakech, he designed Les Jardins de la Koutoubia and developed Strantwerpen.