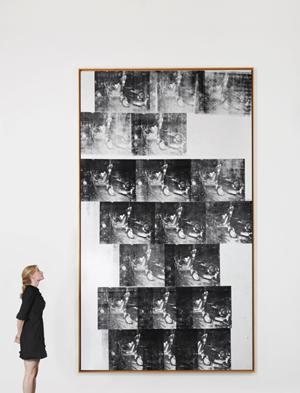 Widely known as the king of pop culture and the person who gave celebrity its own iconic status, Andy Warhol was also deeply preoccupied with the prospect, and idea, of death. It is the works that most vividly address this preoccupation – in all its alternate terror and banality – that are, in the words of art critic Sebastian Smee, the critical ‘dark ballast’ of his oeuvre.

This November in New York, Sotheby’s will offer a work that embodies this dark ballast at its most dramatic and impactful:  White Disaster (White Car Crash 19 Times), a work of unique scale and intensity from Warhol’s pivotal Death and Disaster series of the 1960s - one of the most provocative and haunting artistic achievements of the 20th century, and arguably the most significant achievement of the artist’s career.

A monumental masterpiece, White Disaster (White Car Crash 19 Times) from 1963 will star as the highlight of Sotheby’s New York Contemporary Evening Auction on 16 November, estimated in excess of $80 million.

Measuring 12 feet tall and 6 feet wide, the magnificent scale of Warhol’s White Disaster echoes that of the imposing altarpieces with which, as a devout Catholic, he would have been so familiar. There is no doubt that the physical magnitude of the panel - the largest of all Warhol’s single-panel Car Crash works – has the power to invoke a sense of awe and reverence akin to that of a religious altarpiece. In fact, the religious overtones of the work extend beyond its mere scale. As John Richardson explains: “The whole repetition of Andy’s imagery stems from the fact that he was Catholic. He went to church, he went to confession, he had to do ten Hail Marys, twenty Ave Marias, and all this is reflected in the way his imagery is repeated again and again and again.”

Beyond the repetition of the image in this work, the composition leads the eye upwards. As a child, Warhol would stare for hours at the icon paintings of Christ and the Saints in his local Byzantine Catholic church in Pittsburgh. He would also study, throughout his life, the works of the great Renaissance painters. Here, in homage to them and to his own convictions, he has created his very own 20th-century Ascension.

White Disaster (White Car Crash 19 Times) is the first large Death and Disaster painting to appear at auction since the landmark sale of Silver Car Crash (Double Disaster) at Sotheby’s New York in 2013. That work sold for $105.4 million – establishing a new record for the artist at the time, and joining a small handful of works to have sold for more than $100m. In fact, in the last twenty years, only two large-scale Death and Disaster paintings have come to auction, both of which achieved new records for Warhol when they were offered.1

Testifying to the work’s pivotal importance within Warhol’s career, the painting has been widely exhibited in Warhol’s most significant museum retrospectives, including the important early survey at the Pasadena Art Museum, Tate Museum in London, and Whitney Museum of American Art in New York in 1970-1971; his retrospective at the Museum of Modern Art in New York, Art Institute of Chicago, and Centre Georges Pompidou in Paris, among other travelling locations, in 1989-1990; the important exhibition Pop Art at the Royal Academy of Arts in London, Museum Ludwig in Cologne, and Museo Nacional Centro de Arte Reina Sofía in Madrid in 1991-1992; and most recently, the acclaimed exhibition ANDY WARHOL/SUPERNOVA: Stars, Deaths, and Disasters, 1962-1964 at the Walker Art Center in Minneapolis and other travelling locations in 2005-2006, amongst notable other exhibitions.

Only two other large-scale Death and Disaster paintings bear this impression of the crash, one of which, Orange Car Crash Fourteen Times, is housed in the Museum of Modern Art in New York. The other, Silver Car Crash (Double Disaster), having set the auction record for the artist in 2013.

The painting carries equally storied provenance reaching back to New York’s Stable Gallery, where Warhol debuted his first solo Pop exhibition in New York City in November 1962, only a few months prior to creating the work. The painting later passed through the venerable collections of gallerists Heiner Friedrich - founder of the Dia Art Foundation - and Thomas Ammann, and now re-emerges on the market from a private collection where it has remained for 25 years.

White Disaster (White Car Crash 19 Times) will appear in a public exhibition for the first time in more than 15 years when it goes on public view in a pre-sale exhibition from 4 -16 November in Sotheby’s New York galleries.