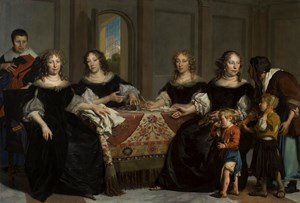 The Museum’s permanent chronological presentation about the histories of Amsterdam, Panorama Amsterdam, City Time Lapse (Panorama Amsterdam: een levende geschiedenis van de stad), displays familiar but also new and unfamiliar narratives about, and perspectives on Amsterdam’s past, that tell the story of how Amsterdam was established and is still developing today. In addition, there will also be smaller exhibitions, changing every six months. The courtyard will host free outdoor exhibitions and the Amsterdam Museum will also organise extensive learning and public programmes at its temporary home in the Hermitage. Permanent collection presentation: Panorama Amsterdam: A Living History of the City
The Panorama Amsterdam: A Living History of the City collection presentation consists of over 250 objects that give visitors a multifaceted picture of Amsterdam’s numerous histories: classic icons from the city’s collection alongside new or rarely exhibited work. The presentation, designed by Studio L A, comprises two sections that interact with each other. The outer wall displays a chronological selection of stories about the city. Visitors walk through Amsterdam’s past and get a sense of how the city and its residents developed. The selection includes major, influential events, reflecting on how the city was seen at that particular time and how this is manifested in the museum’s collection. The area in the centre of the hall, which serves as a laboratory, zooms in on themes which are intrinsically linked to the city, but which in the past were left out of the main narrative about Amsterdam – either deliberately covered up or overlooked. ‘Inside’ and ‘outside’ relate to each other, creating striking and surprising intersections. Themes that are highlighted include science, trade, women’s liberation, the second world war, protests, Ajax, migration and sexual freedom.

The presentation concludes above the laboratory with a view of the main hall, a place to reflect and share experiences. Until 2025, various artists-in-residence will present their own reflections here on the stories about the city and its past. The Panorama Amsterdam presentation will serve as a testing ground. Over the coming years, in preparation for the return to its refurbished main location, the Amsterdam Museum will experiment with new perspectives on the multifaceted history of the city and of Amsterdam’s wonderful collection.